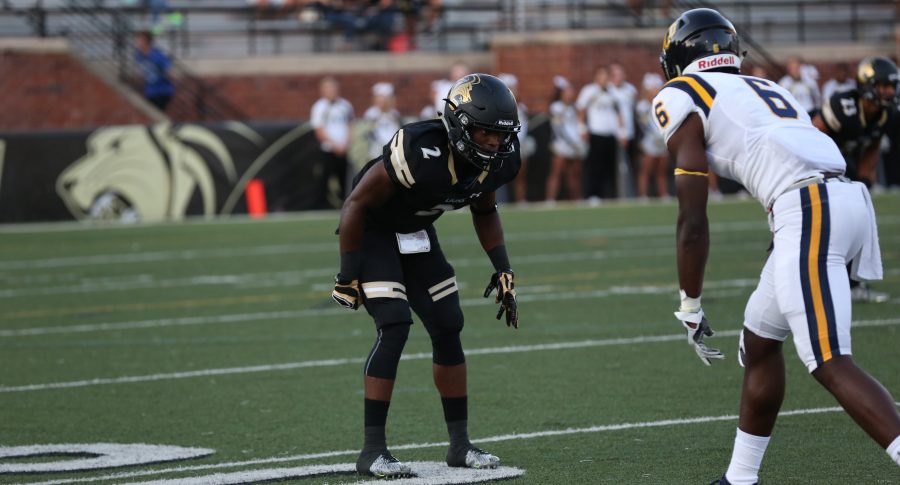 Lindenwood senior defensive back Bakari Triggs faces up against University of Central Oklahoma wide receiver Josh Crockett in their game at Lindenwood on Sept. 1, 2016.

The players on the Lions football team will have their sights set higher for the season when they step foot on the gridiron Thursday at the University of Central Oklahoma.

Last season, the Lions finished with a 3-8 record as did Central Oklahoma, and the teams are tied in four matchups since the 2011 season.  Central Oklahoma is led by quarterback Chas Stallard, who amassed the second-most yards of any player in school history over his past three seasons.

This season will mark the debut of head coach Jed Stugart, who sees a team that is becoming unified.

“We’ve preached family and chemistry and unity, and I think they’ve really bought into that aspect,” Stugart said.

Stugart said the team is progressing on the football field as well, but he isn’t sure how it will stack up against the rest of the competition.

“They’ve done a great job picking up the offense and defense, and I feel like we can go line up and play some football,” he said. “But until you get out there and play an actual game, you really never know. But their effort and energy has been there, and that’s the thing I’ve been the most concerned about.”

The game will begin at 7 p.m. in Edmond, Oklahoma.