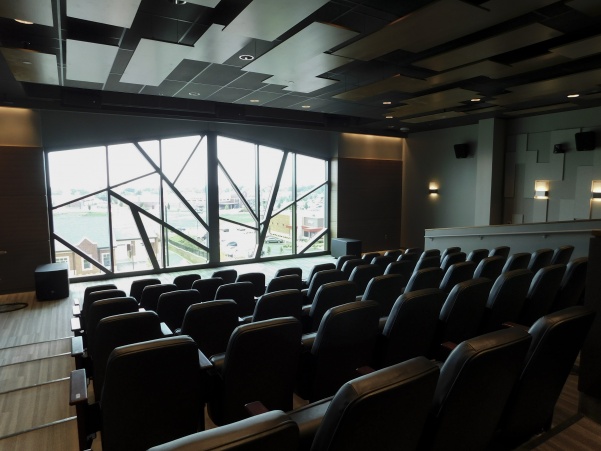 The theater in the LARC will be the new home of the Film Series this year. The screen drops down over the window. Photo by Kat Owens.

The Film Series has upgraded locations to the new theater in the LARC with the hopes that it will revive interest in the program.

Movies screenings will be at 7 p.m. every Tuesday and Thursday except for Oct. 24 and Nov. 23. The theater is in Room 343. While concessions are no longer available at the new location, admission is free with a student ID and is $2 for the general public.

“Deadpool” will be kicking off the series tonight. Andrew Millians, assistant professor of digital cinema arts, is the administrator for the Film Series now and said this new location has the power to re-energize the weekly showings.

“The traffic through the LARC is more than Young,” he said. “There’s more of a possibility for students to be in and around the LARC at 7 o’clock than Young.”

This is the first year that Millians is fully in charge of the Film Series. He took over from philosophy professor David Brown, who started the film series in 2011.

Millians said he wanted to add a wider variety of films, expanding to popular blockbusters, classics and obscure “arthouse” films. The series also provides a unique opportunity for professors to incorporate films in courses like cinema arts, history, gender and African studies.

Box office hits that will be playing this season include “Logan,” “Edge of Seventeen,” “Wonder Woman,” “La La Land” and “Get Out.”

As a professor of digital cinema arts, Millians said he thinks showing films on campus is worthwhile because of the social and educational benefits.

“It’s expensive to go to movies,” he said. “The reality is a lot of students loathe to spend 13 bucks to go see a movie, especially when so much stuff is on Netflix and Hulu.”

Millians said the film series has the power keep students on campus more because it is the entertainment currency of our day.

Throughout the years, different generations demand new things, so Millians said the university needs to remain flexible to satisfy students.

“The dynamic of the university has changed, so we’re going to have to change some things to get butts in seats,” he said.

A full list of the film showings can be found here.