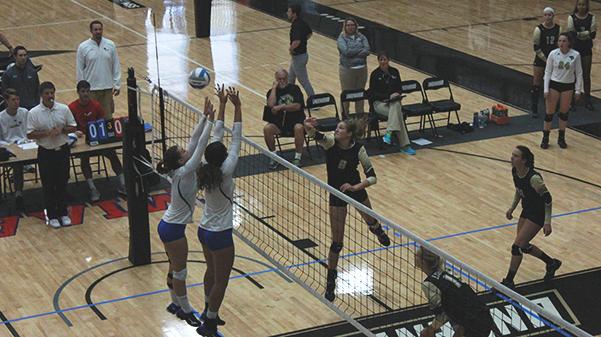 Jessica Krygsheld makes a play during a match against Georgian Court University on Sept. 9 2016.
Photo by Lindsey Fiala

When the women’s volleyball team takes the court Friday against Oakland City University for its season opener, it will be backed by an entirely new coaching staff.

Coach William Condon will be leading the squad after being hired last January.

He previously was the head coach at Armstrong State University in Savannah, Georgia, for nine seasons. According to the university’s website, he collected a 252-64 record with a .797 winning percentage.

Friday’s game against Oakland City University will be the first of four games the team will play in the Capital Classic tournament in Springfield, Illinois. Other opponents include Mississippi College, Concord University and Ohio Valley University.

“[Coaching the team] has been great so far and they have learned a lot in a short period of time,” Condon said. “We have seven new players on the team, six being freshmen and one being a transfer who I coached at my previous school.”

Last season the Lions were 11-19. Their first home game is Sept. 22 against Missouri Western State University.