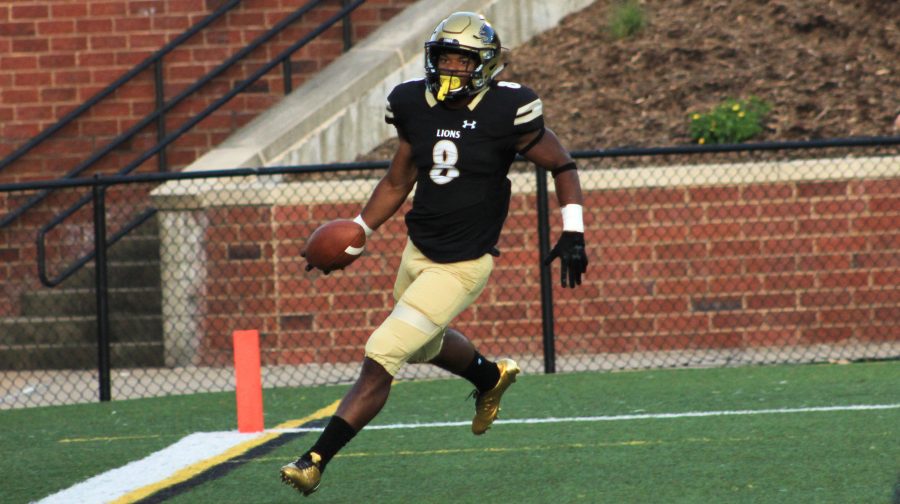 Calen Campbell celebrates his career long 65-yard rush for a touchdown to give Lindenwood a 42-3 lead in its game against Northeastern State. The Lions won 49-10.
Photo by Lindsey Fiala

Lindenwood defeated the Northeastern State Riverhawks in its home opener behind a record-setting 417 rushing yards, topping the 376 yards against Culver-Stockton College in 2010. Coach Jed Stugart also earned his first win as a Lindenwood Lion.

Senior running back Shakeem Wharton led the way with 103 rushing yards, but the Lions had a lot of help on the ground Thursday night. Junior running back Calen Campbell, junior quarterback, Najee Jackson and sophomore running back Nash Sutherlin all rushed for at least 70 yards.

Stugart was mixing and matching the running backs from the very beginning of the game. Campbell started the game, then Wharton would come in the next series, alternating every drive.

All of that rushing set up a great passing play from Jackson right before the half. As time ticked down, Stugart called a Hail Mary pass. Jackson had the ball at the Riverhawks’ 43 yard line and heaved one all the way to the end zone. The ball tipped off multiple defenders and landed in senior wide receiver Deantrell Prince’s hands, extending the Lions’ lead to 28-0 at the half.

Once the lead got up to 42-3 in the 3rd quarter, Campbell’s, Wharton’s and Jackson’s nights were over.

The Lions showed depth at the skilled positions. It was the first career game for Sutherlin, who ended the night with seven carries for 70 yards.

Backup quarterback and redshirt freshman Max Meylor came into the game in the fourth quarter with a big Lion lead. His first career pass was a memorable one, a 50-yard strike downfield to junior wide receiver Justin Smith for both of their first touchdowns in a Lion uniform.