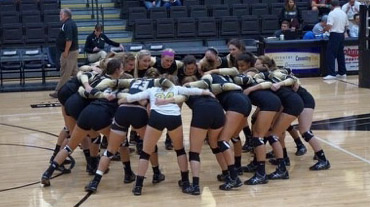 Lindenwood’s Women’s Volleyball team huddles up and gives motivating words before the beginning of the game.
Photo by Lindenwood Athletics

The Lindenwood women’s volleyball team hosted the “Lindenwood Challenge” tournament on Saturday and Sunday with doubleheaders on both days.

In its first game on Saturday, the team took on the University of Bridgeport and won 3-0. Lindenwood senior Alex Dahlstrom led the team with 10 kills and two aces, according the lindenwoodlions.com. Junior Allyson Clancy led the team’s assists with 16.

In game two of the day, the Lions broke their season winning streak as they fell to Augustana University 3-2. Bailey Dvorak had the highest amount of kills for the Lions with, 10 and Clancy led in assists with 21. Senior captain Ivy Reynolds had three aces and 20 assists during the game.

The team was off to a good start on Sunday when it defeated the University of Illinois – Springfield 3-0. Sophomore Alex Bogusz had eight kills and six blocks in this game. Reynolds matched Bogusz for kills and had 13 assists. Clancy led the team with assists, totaling at 19 by the end of the match, according to lindenwoodlions.com.

In their final game of the tournament, the Lions fell 3-1 against the University of Missouri – St. Louis. Senior Emily Wylie had 15 kills. Clancy again led with assists, having 22 total.

After splitting the weekend with two wins and two losses, the team now stands at a 6-2 record on the season. The team’s next matchup will be against California University of Pennsylvania as a part of the Urbana Fall Invitational in Urbana, Ohio, on Sept. 15-16.