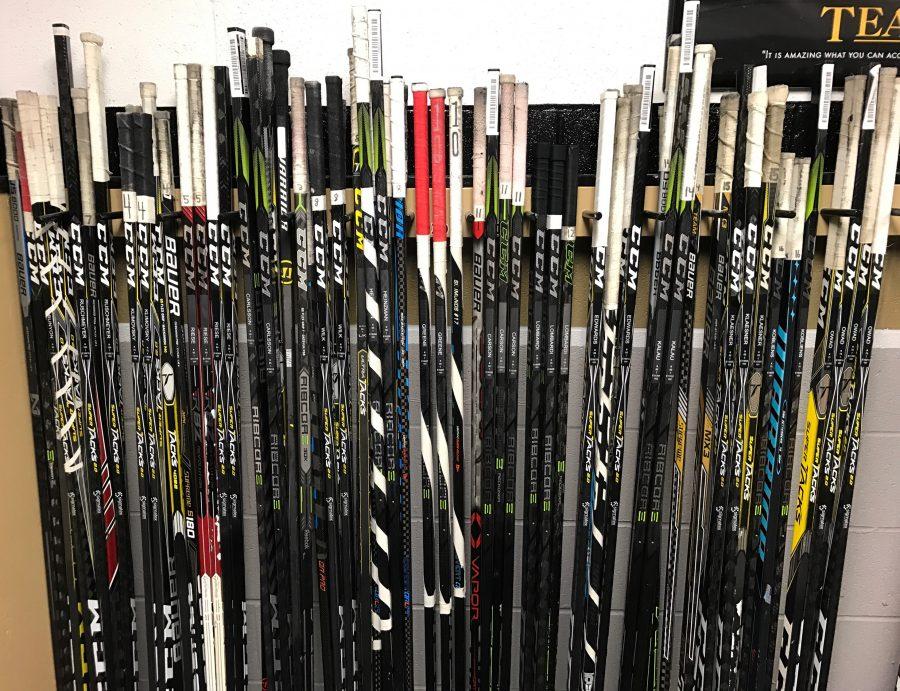 The men's hockey team have new hockey sticks for the season.
Photo by Alex Kalau.

On Friday, Sept. 8, the Lindenwood men’s Division I ice hockey team fell 8-2 in its exhibition game against the Junior Blues in Springfield, Illinois. However, the loss is not stopping them from having high hopes for this upcoming season.

“It’s important we get off to a good start during the first semester,” said junior forward Cade Owad. “Every day we continue to build and grow as a team. We’re excited about the new recruits we brought in this year and are very eager to get things going.”

Assistant coach Mark Abney is also ready to get the season going and said, “Everyone wants to win at the beginning of the season, but we feel like we have the team that if they put in the work, we can be a really good team.”

The recruits are also at the top of Abney’s mind, and he said, “We like to play fast, and if you look at the three additions on defense with NCAA DI transfer Jake Townsend and two freshmen, Hunter Ruschmeyer and Matt Runyon, they can all make the good first pass and also join the rush, so our transition game should be really strong.”

In addition, Abney said, “We pride ourselves in our tough regular-season schedule, which is always one of the toughest in the country, to get us battle-tested for playoffs. Everything we do all year, on and off the ice, is to win one game, and if we work hard and enjoy the process, the results will take care of itself.”

Recently, the Lindenwood Student Life Sports released an American Collegiate Hockey Association preseason ranking detailing top-voted teams in the league. The Lions came in eighth place after coming off of a 19-13-3 season and a first-round loss to Stony Brook in the playoffs.

Although they fell short last year, the players are aspiring to make a deep run in the playoffs and are looking to become the defending national champions of the ACHA again.

After receiving 29 first-place votes, Central Oklahoma is ranked No. 1 in the preseason lineup. The Lions will face the University of Central Oklahoma Oct. 6-7 at the Arctic Edge in Edmond, Oklahoma.

The season will officially begin on Saturday, Sept. 22, against the University of Oklahoma in Oklahoma City.