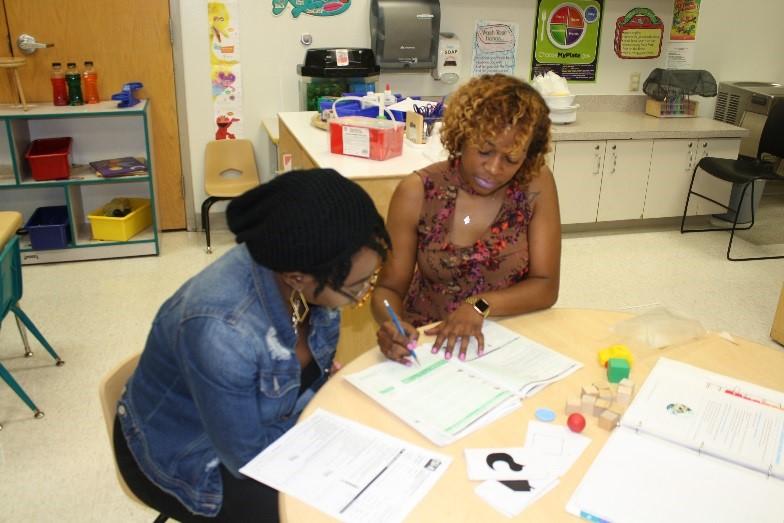 Michele Lemee (right) is seen with another teacher at Urban League Head Start. Lemee is the 2017 PNC Early Childhood Educator of the year.
Photo from Mary Hairston

A Lindenwood graduate will be honored with the 2017 PNC Early Childhood Educator of the Year award on Sept. 23.

Growing up, the people in Michele Lemee’s life pushed her to do her best because she had trouble with her studies.

That’s what inspired her to push someone else.

“It takes a whole village to raise a family,” Lemee said. “We’re all teachers whether we know it or not.”

Lemee, a 38-year-old master teacher at the nonprofit Urban League Head Start in metropolitan St. Louis, graduated from Hazelwood East High School in 1996, according to a St. Louis American article, but also attended Hazelwood West and Pattonville senior high schools. She later graduated from Lindenwood University in 2001 with a degree in Early Childhood Education.

In a typical day, Lemee works with preschool children that are ages 3 to 5, but as a master teacher, she also trains and mentors other teachers.

Hairston also said that Lemee was nominated for the award based on her academic, community, student and parent involvement.

“I’ve always loved kids and wanted to be around them,” Lemee said. “You don’t get paid much, but you get paid when you see how much of an impact you can have on a child.”

Lemee will receive the PNC Early Childhood Educator of the Year award at the 2017 Salute to Excellence in Education Gala at the America’s Center Ballroom, according to the St. Louis American.