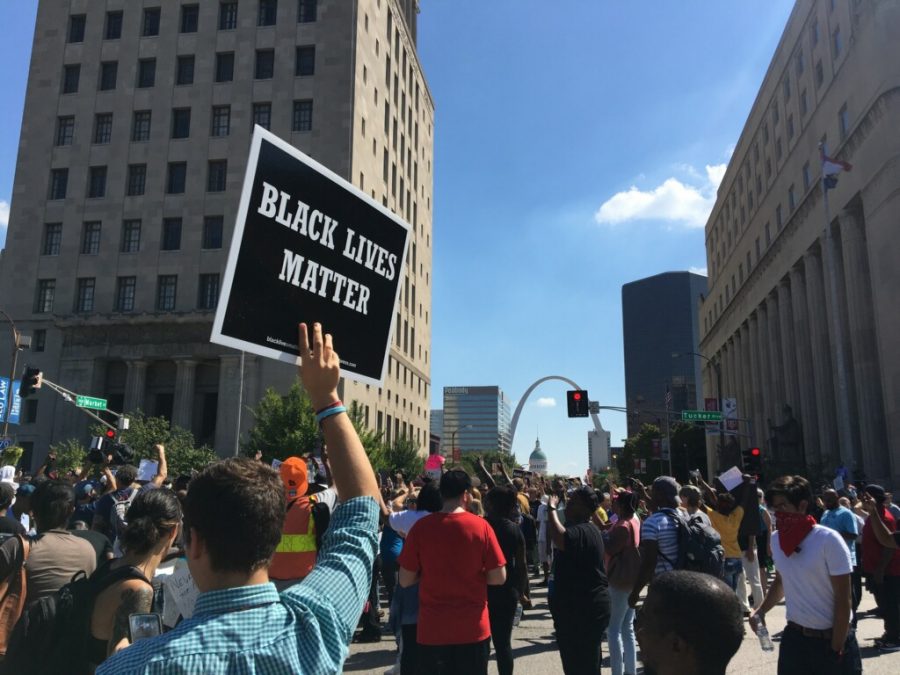 Protests continue regarding the verdict of the Jason Stockley case.
Photo by Ashley Higginbotham

The violence also caused the cancellation of Saturday’s U2 concert at the Dome at America’s Center.

About 50 Lindenwood men and women rugby players planned to work the concert as bodyguards and ushers to fundraise for team expenses Saturday night. The team was hoping to bring in about $3,000.

Sophomore Gabriel Rendon was one of the rugby players who planned to work the concert.

“The St. Louis Metropolitan Police Department responded in numerous locations as demonstrators marched through the streets of the city,” said St. Louis Police Chief Lawrence O’Toole. “Many of the demonstrators were peaceful. However, after dark, many agitators began to destroy property and assault police officers. As of right now, a total of nine St. Louis officers were injured.”

Stockley shot and killed Anthony Lamar Smith, 24, following a 2011 car chase. On Dec. 20, 2011, Stockley engaged in a high-speed chase with Smith after Smith rammed into the policeman’s cruiser. After the chase, Stockley got out of his vehicle and shot Smith five times. He was charged with first-degree murder and armed criminal action on May 17, 2016.

The not-guily verdict was announced Friday St. Louis Circuit Judge Timothy Wilson. Protesters began to assemble within minutes but remained mostly peaceful until about 6 p.m. Friday, according to the police.

Officers who were injured were pelted with water bottles, rocks and bricks, according to the department’s Twitter feed. Beside’s Krewson’s home, property damage included broken windows on businesses on Euclid Avenue and a Dumpster fire on North Euclid Avenue.

This is a breaking news story. Check back for updates.

According to a now-deleted tweet from the St. Louis Police Department’s, a total of 20 police officers were exposed to a chemical substance at protests last night. The chemical is suspected to be a mixture of pepper spray and either paint or nail polish.

As a result of the increased violence of the protests, Ed Sheeran canceled his sold-out concert for Sunday night at Scottrade Center.

Below is a link to Mayor Krewson and Police Chief O’Toole commenting on the riots.