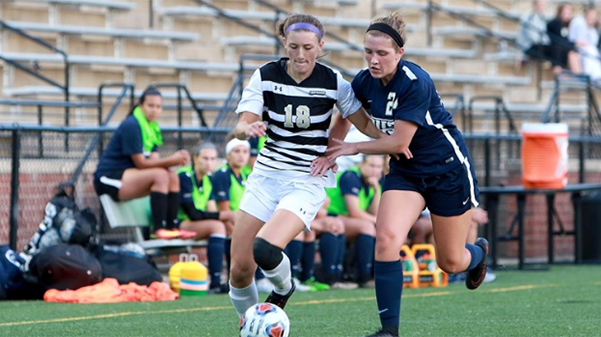 Lindenwood midfielder Alaina White competes for the ball with a University of Illinois Springfield player in their Aug. 5 clash. UIS won the game 1-0.

Here are the Lindenwood sports events on campus this week from Sept. 19 – 25. Students can earn points by checking into events on the Lindenwood Lion Pride app. Points can then be redeemed for prizes, including free Under Armour shoes and Papa John’s pizza. The app is available for free download on Apple’s App Store and the Google Play store.

The Lindenwood women’s soccer team will play against Missouri Western (6-0) and Northwest Missouri (1-3) this weekend.

The Lions are looking to bounce back from two heavy losses at the hands of the University of Central Missouri 7-0, and Missouri Western 5-0.

A key to the Lions’ chances at victory will be the team’s ability to create chances on goal after the players were only able to muster three shots on goal in their past two games.

The Lindenwood field hockey team will look to continue its winning start to the season when the team takes on Mercy University (2-5) on Friday and Queens University (1-4) on Saturday.

The Lions have started the season 3-0 after defeating Indiana University of Pennsylvania 3-1 and Bellarmine University 3-1 and 3-2.

Bridget Hoogendijk currently leads the team in scoring. The sophomore from the Netherlands has found the back of the net four times in three games.

The Lindenwood women’s volleyball team will start its MIAA conference season as the team takes on Missouri Western (6-6) and Northwest Missouri (6-6).

The Lions have improved steadily since new head coach Will Condon has taken over the reins. The team has an 8-4 record through the early portion of their season.

Senior Emily Wylie currently leads the team in kills and hitting percentage, with 113 and .260 respectively.

The Lindenwood men’s soccer team faces a tough challenge when it takes on No. 12 Upper Iowa University (4-1) on Sunday.

The Lions defeated Ouachita Baptist University on Sept. 15 to improve their record to 2-3.

Italian freshman Michele Ganz currently leads the scoring for Lindenwood. Ganz has tallied three goals and one assist this season.