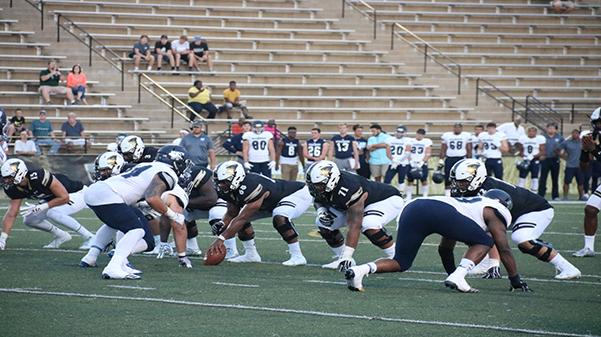 The Lions prepare to snap the ball during the Sept. 16 game against Washburn University.
Photo by Maria Escalona

Almost a year ago to the day, Lindenwood was on the wrong end of a 50-19 score against the Pittsburg State Gorillas. Tonight was a completely different story.

The Lions dominated every aspect of the game both offensively and defensively on their way to a 45-11 victory on Saturday night in Pittsburg, Kansas.

Lindenwood jumped out to an early lead with an impressive 13-play 76-yard drive and never looked back.

The Lions totaled 485 yards of offense, 254 of which came on the ground.

Shakeen Wharton had 107 yards on 12 carries including two scores. Nash Sutherland, another running back, picked up his first collegiate career touchdown late in the contest.

The defense also had a strong night, forcing three turnovers. Jonathan Harris also picked up a pair of sacks.

With the win, the Lions improve to 2-2 on the season. Lindenwood will look to build on the victory when the team comes back home to face No. 18 ranked Fort Hays State at 1 p.m. next Saturday at Hunter Stadium