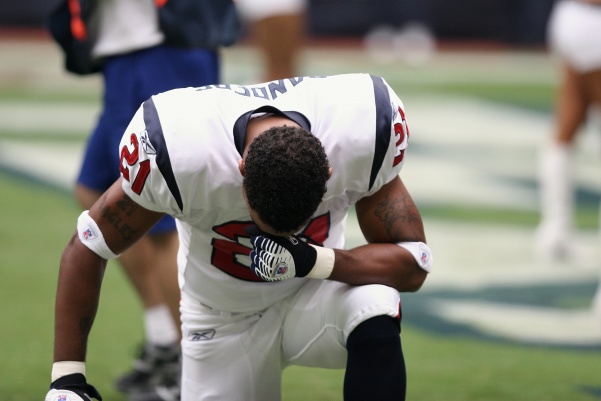 By taking a knee during the national anthem, NFL players are taking advantage of the rights they possess as United States citizens. To demand that they do not denies them their rights.
Photo from Pexels.com

President Trump recently stated that players who kneel during the national anthem should be fired from the NFL because they’re disrespecting the American flag. I think we need to revisit our history to understand why this is an unacceptable statement from our commander-in-chief.

The United States declared its independence from the British empire 241 years ago. The colonists wanted to retain a certain level of self-governance based on the independence they had enjoyed for some time. So it was infuriating to them to be taxed by the mainland without any regard for their unique circumstances or even their consultation beforehand.

But it would do well for us to remember why the colonies were being taxed — the French and Indian War. The war lasted seven years as the British battled the French for territorial control of the upper Ohio River valley.

Britain prevailed in gaining control of the valley and protecting its colonists. But the war was expensive. To make up for the expenses, the British parliament imposed taxes on the colonists.

One of those taxes was the Stamp Act. The taxes within that legislation were the same taxes that the citizens in Britain were paying as well. It’s also worth noting that the citizens of the mainland paid significantly more in taxes than the colonists.

This doesn’t seem like a terribly unfair deal. The government protected the colonists on the frontier from a French occupation and prevented them from being killed. That valuable service happened to incur a cost. So the government had them pay taxes for the expenses that kept them from being scalped.

Yet, within a little over a decade, the colonists destroyed $1.7 million in tea during the Boston Tea Party, tarred and feathered loyalists to the British empire and began a full-scale revolution against their motherland.

The American revolutionaries were 18th-century criminals.

Knowing this, it is ridiculous that people laud the revolutionaries for not only starting, but following through with a violent revolution over taxation for what was defense spending, but consider NFL players ungrateful and unpatriotic because they take a knee during the national anthem.

The revolutionaries died and killed over taxes. Being on the other side of history, I don’t think that they were wrong for doing so. They fought and died for what they saw as a great injustice.

Believing this, why would I condemn a few athletes who decide to kneel during the national anthem because they believe that excessive — let me repeat that — excessive use of force by law enforcement is unjust?

Patrick Henry said, “Give me liberty or give me death.” NFL players are saying, “Give them justice or I will kneel.”

Which of these showcases radicalism?

“Well, Americans have died for that flag!” True. And God bless them for their ultimate sacrifice. May no American dishonor their service.

Let’s just make sure we’re also remembering the 25,000 Americans who died for that flag during the Revolution so people can openly disagree with our government whether the majority thinks they’re right or wrong.

Those 25,000 Americans with parents, siblings, spouses and children sacrificed their lives with the vision that people like NFL players can dissent with the government. They fought tyranny and control for democracy and freedom.

And a head of state suggesting people be fired for their political stance is the very beginning of a tyrannical government.