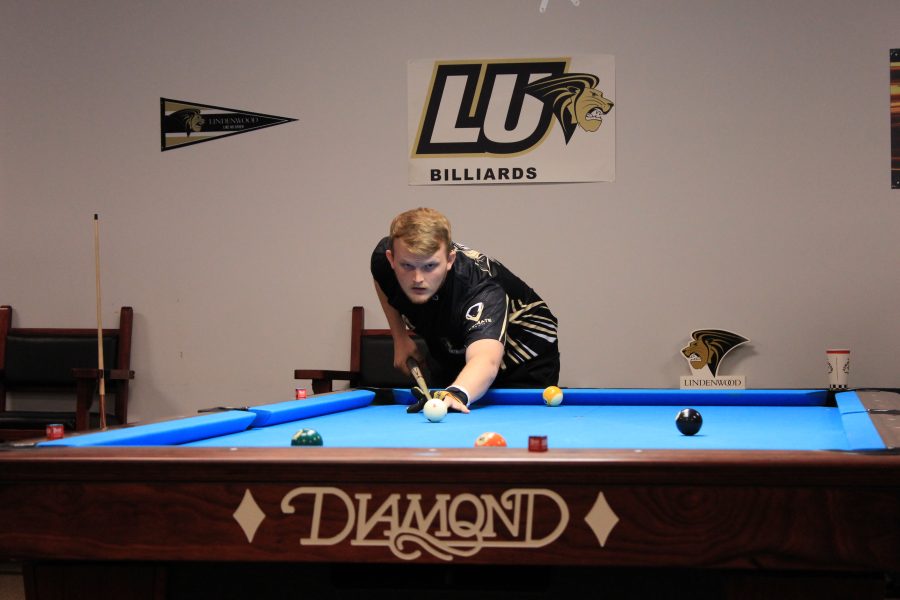 Hunter Davis sizes up his shot in his first set of Wednesday's 15-12 win over Rudy's Rackrunners.
Photo by Walker Van Wey

The Lindenwood billiards team sought heavy competition by taking on club team Rudy’s Rackrunners on Wednesday, and they got just that, defeating the Rackrunners by a narrow margin of 15-12.

“It wasn’t perfect, but it was enough,” said head coach Mark Wilson. “Sometimes we win ugly. I would say that’s what happened here.”

Although the Lions didn’t get the result they had expected or hoped for, the tournament was crucial for youth development.

“Tonight we definitely showed a lot of heart,” said sophomore Brett Snowden. “A lot of our newer players got some tournament experience so it was a definite win that way for us.”

Lindenwood’s youth was a contrast to the experience of Rudy’s Rackrunners,  a lineup with nearly 200 collective years of billiards experience.

“The first time I ever played against a team like that, I was pretty caught off guard because I was expecting to play college students,” said senior Carly Fristoe. “But a lot of people my age and younger don’t really know what billiards is all about, which is a shame.”

Similarly, freshman Hunter Davis recalls being surprised by his opponent when he was on the other end of the table playing against Lindenwood before enrolling as a student.

“Lindenwood seems to get better every single time they come to the table,” Davis said. “Playing Lindenwood is some of the hardest competition I’ve ever played. Being on that side of things, it’s like you’re playing a bunch of robots. They all look the exact same. The mechanics are all there every time, and then on top of that, it goes in almost every single time too.”

It was the robot-like consistency that kept Lindenwood out in front of Rudy’s Rackrunners and eventually securing the win.

“We really kind of started off sluggish,” Wilson said. “As the evening wore on, they kind of broke down. That’s in part because of the general fitness of their team and also lack of stroke mechanics. They don’t really have a shooting system, and we do. If shots aren’t going in, you can get out of your game. If you go back to your system, that can’t happen.”

The Lions’ three-match victory may seem like a step back after a 20-7 routing of the University of Illinois in the previous tournament, but Wilson said he still finds hope in the “ugly win.”

“It feels great because we played our B-game but still won,” Wilson said. “Most inexperienced teams can only win when they bring their A-game. We brought our B-game and even brought a couple of rookies in there and still pulled it out.”

The Lions take on Southern Illinois University-Edwardsville at home on Saturday, Oct. 7.