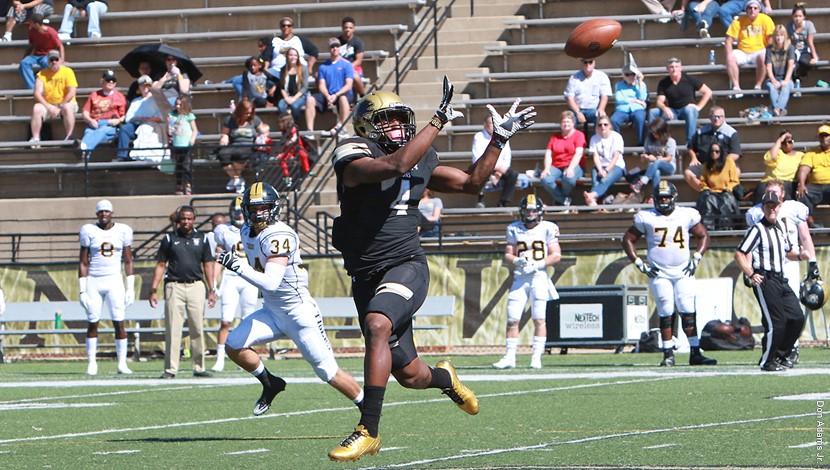 Deantrell Prince has a career day as he makes one of his team-leading 10 receptions and 175 yards receiving.
Photo by Lindenwood Athletics

A historic game for the Lions and the Tigers happened on Saturday, Sept. 30, at Harlen C. Hunter Stadium.

The Lions scored 21 points in the first half, and not a single touchdown was from a running back. It was more points than the Lions had scored in three years combined against Fort Hays State.

Junior Najee Jackson threw for two touchdowns and rushed for one in the first half. Senior DeSean Warren caught two touchdowns, doubling his season total to four touchdown receptions this year.

The Lions led 21-14 at the half. Stugart in his career is 46-4 when his team has the lead going into half. The Lions only allowed 174 yards of total offense to the No. 2 offense in the MIAA in the first half.

Fort Hays’ offense came alive in the second half after scoring touchdowns on two of its first three drives, highlighted by a 76-yard pass on third down by junior Jacob Mezara.

The Lions followed it up with a nine-play, 62-yard drive, but it ended with no points after a missed 34-yard field goal attempt.

Down the stretch, the Tigers took the lead with a 37-yard field goal 31-28 with 7:57 to play to give them their first lead since the second quarter.

The next drive started when a Jackson 15-yard rush turned into a fumble and a turnover for the Lions. Five plays later, sophomore cornerback Ricky McCoy picked off Mezera to give Lindenwood the ball back. On the ensuing drive, Jackson left the game with an undisclosed injury and redshirt freshman Max Meylor entered the game.

Meylor completed a 13-yard pass to Justin Smith on a key third down to keep the drive alive. Coach Stugart called a timeout and Jackson got up on the sideline and grabbed his helmet and ran back to the sideline huddle, but did not enter the game.

The very next play, a swing pass from Meylor got intercepted by the Tigers and taken 25 yards for a touchdown to give the Tigers a 38-28 lead.

Following the next drive, Jackson and the Lions’ offense drove down the field capped off by a 17-yard touchdown pass from Jackson to senior Deantrell Prince to bring the Lions within three, 38-35.

A onside-kick was the Lions’ last chance, and it was unsuccessful as the Tigers recovered.

It was a career day for Jackson as he finished the game 29/47 and threw for 365 yards and three touchdowns, with 175 of those yards and one touchdown going to Prince.

“We like how we’re practicing,” Stugart said. “We have to get better in a lot of areas. The kids are coachable, and the team was saying in the postgame huddle, ‘I feel bad for the next team we play.'”

Next Saturday the Lions will take on Missouri Western State University (3-2) in St. Joseph at 1 p.m.