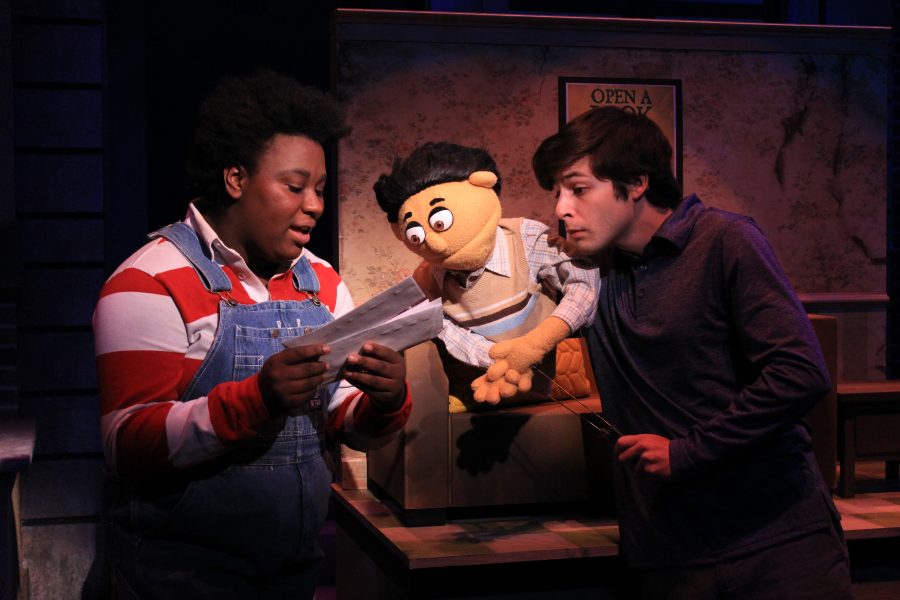 Carleeka N'joi Kimmins as land lord Gary Coleman and Jake Blonstein as Princeton at a dress rehearsal on Sept. 30 in the Emerson Black Box Theater. In this scene they look at Princeton's bills that he needs to pay.
Photo by Lindsey Fiala

The 2017-2018 season of student theater at Lindenwood starts with a musical that according to the director Nick Kelly is like “‘Sesame Street’ on the wrong side of the tracks.”

“So a part of the appeal is [it] is something new,” Kelly said. “It’s not an usual song and dance musical. It’s puppets, and it is a dark take on what it’s like to live if ‘Sesame Street’ was real today.”

Tony White, the box office and patron services manager at Lindenwood, said the show is sold out. An extra matinee show was added because of the high demand, but the seats were filled for that quickly as well.

What is it about this show that made it sell out so fast?

“‘Avenue Q’ is one of those shows that when it came out, it really took theater by storm because it was something new,” Kelly said. “It’s like anything new that you’re going to put out there that has a new take on doing something, everybody wants to see it.”

According to “Avenue Q” official website, the musical was Tony Award Triple Crown winner in 2004, which means it won the best book, best score and best musical awards.

“‘Avenue Q’ also has that added benefit of being comedic,” student actor Jake Blonstein, who portrays the lead character Princeton in the musical, said. “Everybody knows a song from it, even if they’re not sure what the show is, just because some of those songs became these staples of comedic musical theater.”

Kelly said the musical is about the mixture of human beings and puppets who live on Avenue Q and search for their purpose in life.

For instance, Blonstein’s character, Princeton, is a recent graduate who moves to New York to start a job but loses it before he even gets to start. This begins a journey of him trying find what he is meant to do in his life, which is a theme, Blonstein believes, speaks to many.

“The show kind of shows about how you can have an idea in mind or be searching for an idea, but life gets in the way sometimes,” he said. “You are going to be searching, and sometimes you are not going to find what you’re looking for, and that’s OK. You just kind of have to take a step back and breathe and keep trying, because if you don’t keep trying, what’s the point?”

Kelly said the music is contemporary and at times “child-like.”

“They’re very sweet songs, but when you hear the lyrics you’re like ‘Oh my god,'” he said.

Kelly said the show is generally difficult to produce because some theater companies simply don’t know how to work with them.

He said learning to act with puppets is a great learning experience for students.

“It’s just another layer of something new to throw at the students and see how they handle it,” he said.

Kelly said the key with puppets is that the energy of the actor has to travel through his hand to the puppet.

“You’re not really supposed to be looking at the actors [onstage], but you can hear the emotion, and it just transforms to the puppet face to the point that those people become real,” Blonstein said. “And that’s really awesome.”

Kelly ultimately hopes people will get the feel of  “Sesame Street” from the show but “in an odd, different way.”

“Some people might get offended, which I hope not,” he said.

Blonstein said if audience gets offended, that would be a sign they succeeded with their production.

White said students without tickets have an opportunity to go see the show on a preview night at 7:30 p.m. on Tuesday, Oct. 3, which is the last dress rehearsal of the show. Additionally, student tickets will be released 15 minutes prior to the shows if any return tickets have become available.