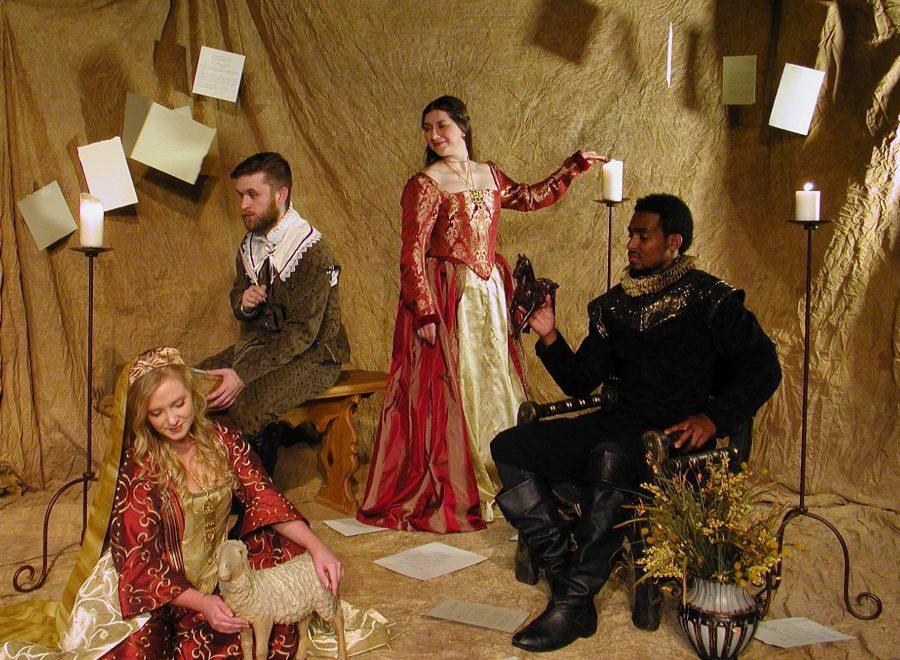 (From left) Lindenwood student Lexie Baker as Dorotea, Eric Kuhn as Cardenio, Shannon Lampkin as Luscinda and Jason J. Little as Fernando who all star in the main roles of the lost Shakespeare play "Cardenio." Director Donna Northcott said the costumes in the play are incredible and a thing to look at in the production.
Photo from Donna Northcott

A Lindenwood director, students and alumni are performing a lost Shakespeare play, which is the fourth production ever done on U.S. soil.

The play,”Cardenio,” produced by the St. Louis Shakespeare Company, is making its debut in the Midwest.

Donna Northcott, director of the show and an associate professor of theater at Lindenwood, has done about 50 Shakespeare productions during her career and said she sees some advantages of working with a lost Shakespeare play.

[perfectpullquote align=”left” cite=”Donna Northcott” link=”” color=”” class=”” size=””]“This is Shakespeare where you are going to be completely surprised. Just like if you were going to a modern play. You have no idea what’s going to happen next, and I find that incredibly exciting.”[/perfectpullquote]

“This is Shakespeare where you are going to be completely surprised,” she said. “Just like if you were going to a modern play. You have no idea what’s going to happen next, and I find that incredibly exciting.”

She said it is challenging because there is no basis of reference with the show, so her duty as a director is to convey the story as clearly as possible.

“Cardenio” tells a story of two couples set in Almodóvar, Spain. Cardenio is a young middle-class man who is in love with his childhood sweetheart Lucinda. Cardenio is called to court to be the companion of Fernando, the Duke’s wild son. Fernando is madly in love with a wealthy farmer’s daughter Dorotea and seduces her. The play revolves around these two couples and their many struggles and the obstacles surrounding whether to be together or get separated.

Nortcott said this is a romance with some tragic and comedic moments.

Northcott said this play is not based on a script written fully by William Shakespeare, but is a reconstructed version. Back in the early 17th century, Lewis Theobald had a script that he called “Double Falsehood,” which he wrote as an improvement on Shakespeare’s play “Cardenio.”

According to the Royal Shakespeare Company website, in 2011, Gregory Doran, the artistic director for the Royal Shakespeare Company, was looking for a play for the opening of RSC’s 50th season and started working with “Double Falsehood.” He ended up going to Spain to do more research on “Cardenio.” He traveled to Spain to the roots of Don Quixote, which was an inspiration to the play and ended up reworking the play to its current state. It premiered in Stratford Upon-Avon in 2011, where Shakespeare is from.

“I think it is well done,” Northcott said. “It feels authentic in the way the language flows and sounds, and the characters feel like they are consistent with what Shakespeare writes,” she said.

Two Lindenwood student actors and four alumni are working with the show.

One of them is Lindenwood actress Calyn Roth, who portrays Dorotea’s maid, the novice and one of the shepherds. This is her first time working with a professional Shakespeare show, and she said working with a Shakespeare play that has barely been done is a bit terrifying.

“It’s a little scary jumping in and not knowing how it’s supposed to go, like when you do something classic like ‘Macbeth,’ ‘Romeo and Juliet,’ ‘Hamlet,’ the story is there, everybody knows it, but with this show it’s completely new information,” she said.

Northcott said actors often find inspiration from other performances but with “Cardenio,” previous performances are hard to find.

“With this one, everyone in the cast is having to start from a completely blank slate,” she said.

Lindenwood actress Lexie Baker, who plays Dorotea in the production, has enjoyed the process.

“I’ve really been able to form my own idea bout who Dorotea is and how she perceives the world, which is such a gift to me as an actor and artist,” she said.

Northcott encourages everyone to come see the show, even those who are not Shakespeare fans.

St. Louis Shakespeare is offering a special discount to student tickets for only $10 with a Lindenwood ID.

Fridays and Saturdays at 8 p.m.