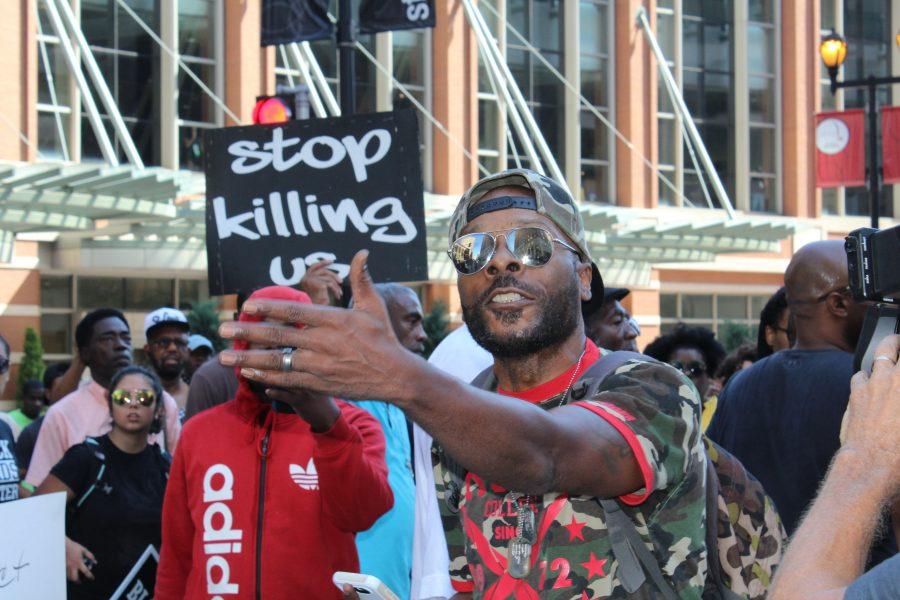 Left: Protester Kevin Nevels speaks loudly about personal encounters with police. “Every time a police pulls up behind me, I have to grab my steering wheel. Do white people?”

Kindergarten is the place where a lot of us learned our basic social skills. We learned how to sit still, how to raise our hands when we wanted to talk and, what I’d argue to be the most important social skill, how to listen to others.

Unfortunately, it seems that since kindergarten, many of us have forgotten how to listen.

We listen to the things we want to hear. We listen to the viewpoints that verify our own. We may even act like we listen to what others have to say. The problem is that there’s a difference between listening and hearing.

What we avoid listening to is anything that challenges our current way of thinking or our worldview.

Racial tension and protests have been the bookends of my collegiate career.

Michael Brown, a black 18-year-old, was shot by Darren Wilson, a white Ferguson police officer, just weeks before I moved to St. Charles in 2014 to begin my years at Lindenwood.
Three months later, a grand jury declined to indict Wilson, and the protests that had been ongoing since Brown’s death quickly grew more widespread.

The first time I saw the protests on the news was immediately after the grand jury’s decision on Nov, 24, 2014. I was sitting on the floor of my freshman dorm room, painting with two of my roommates.I remember watching protesters talk to reporters about why they were there. I remember thinking during those interviews that all the protesters wanted was to be heard.

I strongly believe that the majority of mankind wants three things in life: to be heard, to be understood and to be loved.

People don’t protest because they feel like breaking some windows or destroying their neighborhoods. Yes, windows have been broken. Yes, neighborhoods have been destroyed. But the people doing those things are the minority in the situation and aren’t doing it for the sake of justice.

They protest because they want to be heard and understood, and they want society to show them love by playing its role in eradicating injustice.

Three years later in September 2017, former St. Louis police officer Jason Stockley, who is white, was acquitted of charges related to the 2011 shooting of Anthony Lamar Smith, who was black.

The incident started with a car chase and ended with five bullets.

What was evident during the 2014 protests is evident now in the Stockley protests: People aren’t willing to listen to those who disagree with them.

“I think it was imperative to hear them because it gives you a different side of the same story because we are all open to our own interpretation of what we see and hear,” Mitchell said.

However, as a country as a whole, we seem to be better at plugging our ears with our fingers like 5-year-olds when it comes to hearing other people’s beliefs on a topic that differs from our own.

If you saw the same thing I did on the news during the protesting, what you saw over and over was a setting in which two people of opposite political standing sat and argued about how these protests should or shouldn’t be happening.

No one offers solutions. They instead take full advantage of the platform they are given to advance their own beliefs.

People look around at the Greater St. Louis area and wonder why people are walking in the streets and shutting down roads. Because that has proven to be one of the most effective ways to get society to listen and motivate change.

A study conducted by Harvard and Stockholm universities shows that protests are effective because “they get people politically activated.”

They get people to listen and care about what’s going on around them.

Considering the rising number of protests and the growing volume of media outlets in our country, we all have an opportunity to take a turn and listen.

Sociologist Jacquelien van Stekelenberg explained to the London School of Economics and Politics how valuable media can be in listening to the views of others.

“Media play a significant role in mediating and amplifying the impact of protest,” she said. “But rather than viewing media as passive relays, we should conceive of media as active actors covering, framing and interpreting issues and protest events.”

Quit acting like the only people who can take advantage of their freedom of speech are the people who think the way you do. That doesn’t help anyway. What helps everyone is listening.