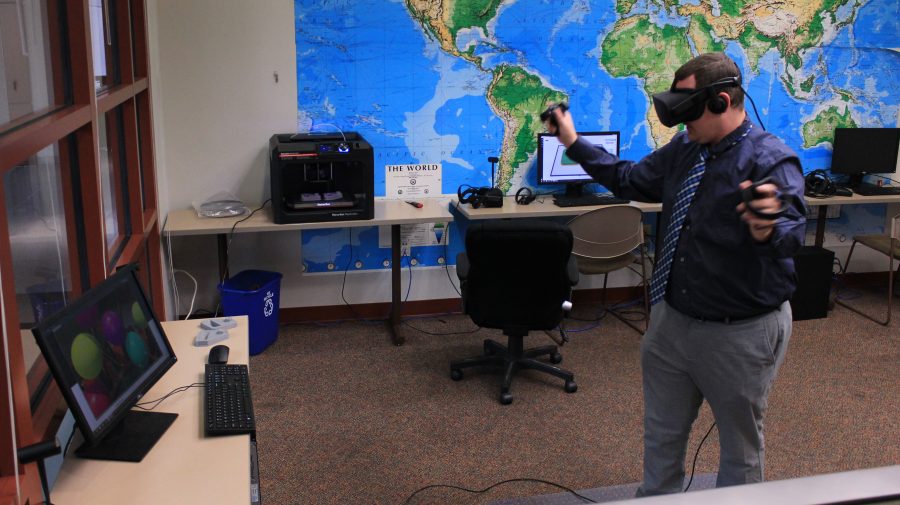 New virtual-reality studios have been approved for locations in Spellmann Center and the Library and Academic Resources Center.

Chris Pusczak, an adjunct professor at Lindenwood who also owns a company called SymbioVR, said that virtual reality has the potential to benefit all majors.

“It gives students a great opportunity to work with these devices without having to go out and buy a brand-new computer, VR device and all of the games,” he said. “They can come in here and learn about it and then eventually, if they would like to, they can purchase it and continue their development.”

Pusczak said hands-on majors like the medical fields will benefit from virtual reality because they provide a simulation of reality without the risk.

“Medical students will be able to open up an application that shows them the human body, and from there they can go from the skin to the bones,” he said. “They’ll have a tangible interactive experience that they can learn with rather than from a 2-D map on the board.”

There is a tester studio to show off the virtual-reality equipment’s potential that is located on the fourth floor of the Spellmann Student Center in Room 4085. Pusczak said that “we would like it in a big visible spot,” to attract attention.

“I would like to have two separate labs. One would be VR specific and AR, augmented reality, specific, which is looking into the real world and overlaying 3-D objects and stuff in front of it,” he said.

Pusczak said that “being able to get [students’] hands on something that’s never really been seen before in the mainstream market and being able to hands-on develop with the equipment rather than having to buy it themselves,” are ways the technology will benefit Lindenwood.

Pusczak said that through the new VR studios, students can get exposed to the technology in a less expensive manner and add it to their résumés.