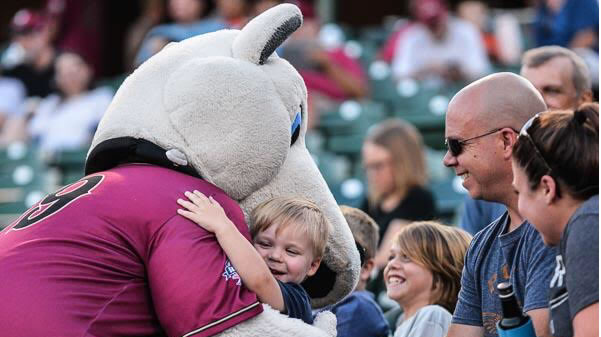 Lindenwood student, Jennifer Wunder, as Ruffy the mascot, hugs a child during a Rascals home game. “It’s just a good feeling all around when you’re around those kids that are just so excited to see you," Wunder said.
Photo by Ricky Rick Photography.

Lindenwood student Jennifer Wunder wanted her dream so badly she agreed to be in a smelly dog costume.

This summer, Wunder worked an internship as Ruffy, the dog mascot for the professional baseball team the River City Rascals. Now she is working for the St. Louis Blues as the handler for Louie, the team’s bear mascot.

“I don’t need to meet the players; it’s just being there and in the crowd,” she said. “That’s what I’ve always had a passion for.”

Once Wunder got to college, she discovered she had a passion for branding and graphics, majoring in interactive media and web design. Her academic adviser, Jay Ratican, suggested getting an internship with a minor league team to combine her love of branding and hockey.

Wunder then applied for the mascot position with the River City Rascals. What Wunder saw was more than just “running around in a fur costume,” but an opportunity to run Ruffy’s social media and webpage, plan skits, coordinate appearances and write newsletters.

[perfectpullquote align=”right” cite=”” link=”” color=”” class=”” size=””]”There’s a magic behind it. There’s this illusion that there is really a big dog that walks around or a blue bear that lives in Scottrade [Center].” -Jennifer Wunder[/perfectpullquote]

Ratican, a IMWD professor, stressed that “networking opens doors” and wanted Wunder’s internship to be a connections opportunity.

“The idea was not so much her being in a costume but her using that to get her foot in the door for a sports team,” he said.

Wunder said she gets a huge adrenaline rush from games. Being a mascot reminded her of when she would perform for the Lindenwood Golden Line during her freshman year.

“I would be up all night, so excited for performing. That’s what happened this summer with the Rascals,” she said. “I didn’t sleep at all.”

Another reason loves being a mascot is because she gets to “share that joy” with kids.

“I learned that if a kid hugs you, you let them let go first because you don’t know how much that kids needs that hug,” she said.

After her summer internship ended with the Rascals, Wunder reached out to the Blues specifically to work with Louie. Wunder said the Blues fan development department hired her because of her experience with mascots.

“I’m like the first person that’s like ‘I just want to work with the mascot,’” Wunder said.

Wunder said that being a mascot is like an alter ego; it’s a character that she creates.

“There’s a magic behind it,” she said. “There’s this illusion that there is really a big dog that walks around or a blue bear that lives in Scottrade [Center, where the Blues play home games].”

Wunder’s sorority sister Heather Rosson, an intern for the River City Rascals, said she admires Wunder for being a mascot because it isn’t common for women.

“Recently, I’ve really gotten to know her, and I think [being a mascot] really fits her personality,” she said.

As a handler, Wunder said she is the “voice of Louie,” helping him navigate the stadium and communicating to fans for him.

But Wunder also hopes to bring another, more professional aspect to being a handler.

“Right now it’s just like run with the mascot,” she said. “But I want to help with the social media, with appearances [and] plan community events.”

Wunder said she is thankful that the Blues started her on preseason games because the crowds and the fast-paced game are a lot different than minor league baseball. But ever since her first game experience, she said she knows the Blues is right for her.

“Being able to see the whole arena from down below — I don’t know how to explain it,” she said. “I just remember standing in the Zamboni tunnel and seeing the arena from a different perspective than the stands, and I just had goosebumps.”

Ratican is proud of Wunder and wants other students to pursue their dreams like she did.

“She’s a very driven student, so I’m not taking credit for any of the successes she’s had,” he said.

Wunder said she is amazed at looking back at how far she has come.

“A year ago I had no idea what the heck I wanted to do. I just knew I wanted to work for the Blues and I loved Louie,” she said.

Wunder said she plans to pursue the Disney College Program after graduation. According to Wunder, the program will help her become more marketable as an employee in fan development for the Blues and maybe as a future NHL mascot.