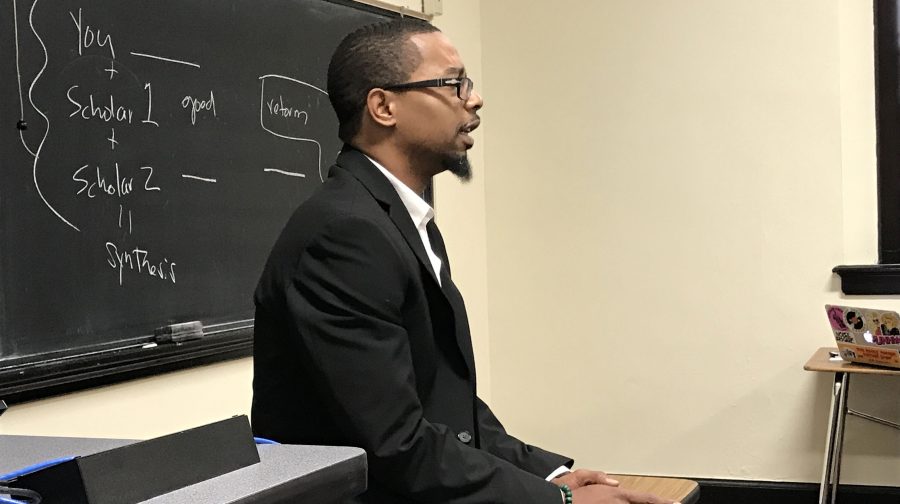 Tarrell Campbell talking to his Research & Argumentation class about an upcoming assignment. Campbell is this year's winner of the St. Louis University Walter J. Ong Award for Excellence in Graduate Research.
Photo by Megan Courtney

The award was established in honor of Walter J. Ong, S.J., who was a faculty member of Saint Louis University and “one of the great scholars of the 20th century,” according to SLU’s website. It’s annually presented to a doctoral student in the English Department “in recognition of genuinely exceptional research and scholarly achievement and promise.”

Campbell said the recipient is selected by a group of members from the English department based on the work that that person has done. The department asks the recipient to send in a portfolio ranging from 80-150 pages of their best work. The committee then meets, reads everything that was submitted, and then decides who the award goes to.

Campbell said that he manages a few websites that he allowed the committee access to. He also sent in a portion of his dissertation, which focuses on representations of African-American masculinity in 21st century literature.

As an adjunct professor at Lindenwood, Campbell said that he teaches classes such as ENGL 150: Strategies for University Writing, ENGL 170: Research & Argumentation and ENGL 202: World Literature II.

The award was presented to Campbell on Sept. 19 of this year by the Library Associates of St. Louis with a reception following the ceremony.

One of the highlights of the evening for Campbell was interacting with Margaret Atwood, who is internationally known and has written award-winning poetry, short-stories and novels, including The Circle Game (1966), The Handmaid’s Tale (1985), The Blind Assassin (2000), Oryx and Crake (2003), and The Tent (2006), according to her page on Biography.

“I was highly excited. It’s one of the top honors that the school honors,” Campbell said.