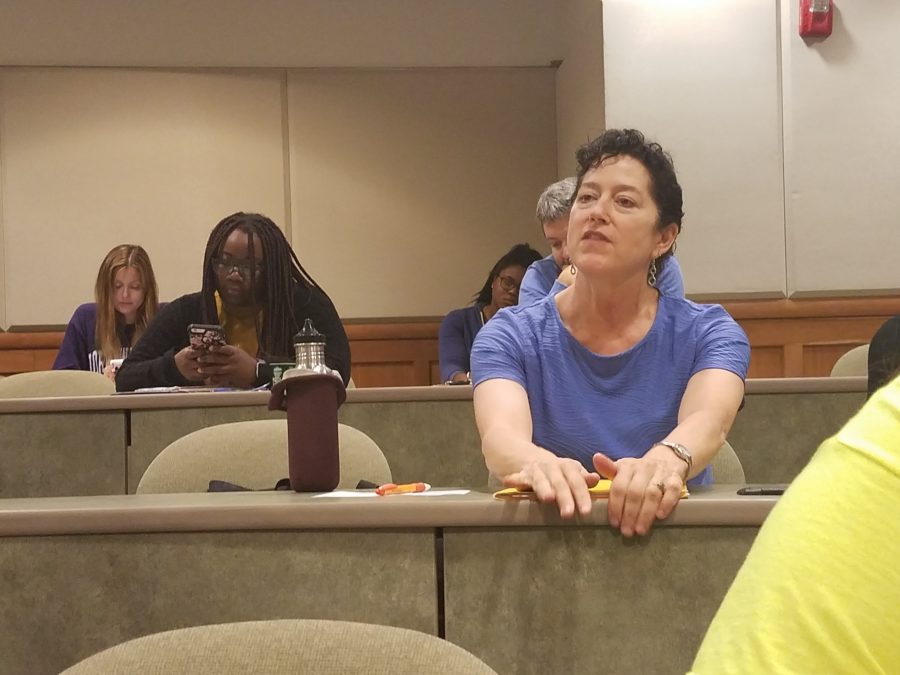 Associate vice president of student life and diversity Dr. Shane Williamson organized the forum with assistant history professor Ted Cohen, as part of the Diversity Equity and Inclusion Taskforce.  When introducing the panel, she said that the diversity dialogues were set up to create a “safe, open, and educational experience” to discuss relevant and important issues.

“Whether we think we’re impacted or not, we all have an opinion,” said Williamson, the dean of students.

Though the event had lower attendance than the Stockley forum, it still created discussion about free speech, its legal background, its historic intent and its limits.

The discussion began with Heidenreich, who also teaches political science and constitutional law, professorially walking about the stage and giving a summary of the history of judicial debate over the First Amendment and the reasons behind largely unconstrained free speech.

“Do any of you trust me to draw the line on… what you should be allowed to say?” said Heidenreich, a strong supporter of free speech without government intervention.

According to Heidenreich, the constitutionality of Trump’s response to some NFL players kneeling for the national anthem is still undecided by the Supreme Court.

Heidenreich, a retired national guard officer who served in active duty, said he is more offended by those who claim to speak for all veterans than by the anthem protests.

“Every time I see these young men [kneel for the anthem], my first response is ‘Cool, I did my job.’,” he said.

Though no attendees expressed offense over the protests, some, including economics professor Howard Wall, said that athletes kneeling for the anthem was counterproductive and distracted from their cause.  However, french professor Heather Brown-Hudson chimed in that the protests resulted in a lot of “horizontal, intersectional” activism and will have a long-term positive impact for the cause.

“The fruits of this labor are not going to be felt in our lifetime, that I can tell you, but they will be felt,” she said.

Wall came to the forum to hear what others had to say and ensure free speech proponents like himself were fairly represented.  He said after the event that he thinks most kneelers are not unpatriotic, but “if the mass of people believes that kneeling… for the national anthem is an insult to soldiers or veterans or all of that, then whether they’re right or wrong, that’s the effect it’s going to have.”

Lungile Tshuma, an audience member from Zimbabwe, said it seems backwards for some speech to be universally condemned but still legal.  He theorized that Americans are more vocal because the U.S. is more diverse culturally than others with similar free speech laws.

“Someone might have free speech, but they won’t say something… because of how the society views that thing,” he said. “The United States is a melting pot of different cultures and it doesn’t have a unified culture so, its easier for everyone to say what they believe.”

Witherspoon later transitioned the conversation to the August alt-right rally in Charlottesville, Virginia.

“Does anyone disagree with them having the right to their freedom of speech?” he asked the crowd.

Brown-Hudson answered this question with fervent applause.  She said she believes there is reason to infringe upon “inciteful speech that can lead to destruction of property and death.”

“I think free speech is not absolute, and the line hasn’t been drawn yet,” she said.

One student agreed that racist speech is dangerous, but was hesitant about legistlation against it and prefers public condemnation.

“In the age of technology and cameras… you don’t get to hide if you believe that kind of thing,” she said.

“To allow such exemptions is to destroy freedom of speech entirely.  I see it in Britain.  People don’t know what they can say that’s ‘hate speech’,” he said.

Audience members described the dialogue as polite, despite passionate disagreements.

Heidenreich, who has volunteered on the campaigns of two Democratic senate nominees, said the most important thing he learned about political disagreements is to not take it personally.

“I had one [argument] where people thought we were going to throw chairs at each other, …but they didn’t know it a hour later when we were at a bar… talking about what a great time we were having,” he said.

The next Diversity Dialogue will take place November 14th on immigration and the recent travel bans.  The DEI Taskforce encourages students and staff to suggest topics for future forums.