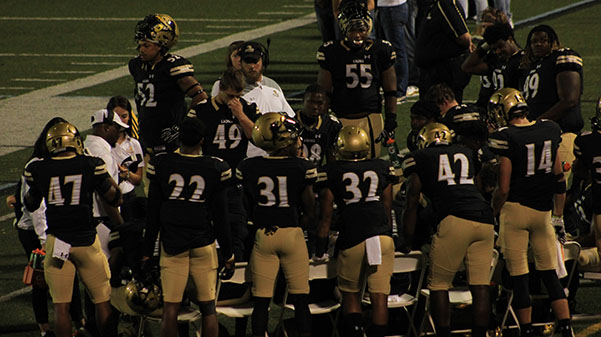 Lions defense huddled together on Sept. 7 against Northeastern State.
Photo by Lindsay Fiala

Lindenwood fell to Missouri Western State Saturday by a score of 40-8 after the Lions gave up a season-high five turnovers.

The Griffons rushed for 377 yards against the Lions.

Coming into the game, Missouri Western State averaged 39.6 points per game, which ranked first in the MIAA. Lindenwood ranked fourth on defense, allowing 24 points per game.

On the first possession of the game, Missouri Western State, the top-scoring team in the MIAA, had a 58-yard kickoff return, which gave the team a short field to work with, and just two minutes and eight seconds later, Missouri Western had a 7-0 lead.

The following possession, junior quarterback Najee Jackson threw his first interception of the season and Missouri Western returned it to the Lions’ 41-yard-line, but a face mask penalty against the Lions gave the Griffons a first and 10 on the Lions’ 25. However, Lindenwood held the Griffons to just a field goal, which made the game 10-0 with 9:06 to play in the first.

The Lions offense began marching down into Griffon territory, then Missouri Western State took a timeout. The following play, Jackson threw a deep ball downfield that was intercepted by the Griffons.

That drive resulted in Missouri Western State making another field goal, from 40 yards, to give them a 13-0 lead at the end of the first.

Lindenwood’s offense started out the second quarter strong, getting the ball to the 4-yard-line and a first and goal. After a Lions bad snap and a holding penalty, it set up third and goal from the 26. Jackson’s pass was then intercepted and returned 99 yards for a touchdown to give the Griffons a 20-0 lead with 10:01 to play in the half.

A week after allowing 193 rushing yards against the No. 14 Fort Hays State, the Griffons rushed for 170 yards in the first half.

At the end of the half, Missouri Western State made its third field goal to extend the lead to 23-0.

Junior Josh Coleman’s 40-yard rush highlighted the first possession of the second half for the Griffons that ended in a touchdown to extend their lead to 30-0 with 10:24 to play in the 3rd.

On the following drive, Jackson fumbled, and it was recovered by Missouri Western State. Then quarterback Dom Marino fumbled for the Griffons to give the ball back to Lindenwood.

Jackson was pulled from the game. His final stat line was 10 for 20, 124 yards, four interceptions and a fumble, according to Lindenwood Athletics.

Senior cornerback Bakari Triggs returned the kickoff 99 yards for a touchdown, making it the first kick return for a touchdown of the season. Freshman quarterback Max Meylor made the two-point conversion, cutting the lead to 37-8 with 3:49 in the third quarter.

The game would conclude with one final field goal from Missouri Western State to give it a 40-8 win over Lindenwood.

Next Saturday, Lindenwood will be at home against Emporia State (3-3) at 1 p.m. at Harlen C. Hunter Stadium.