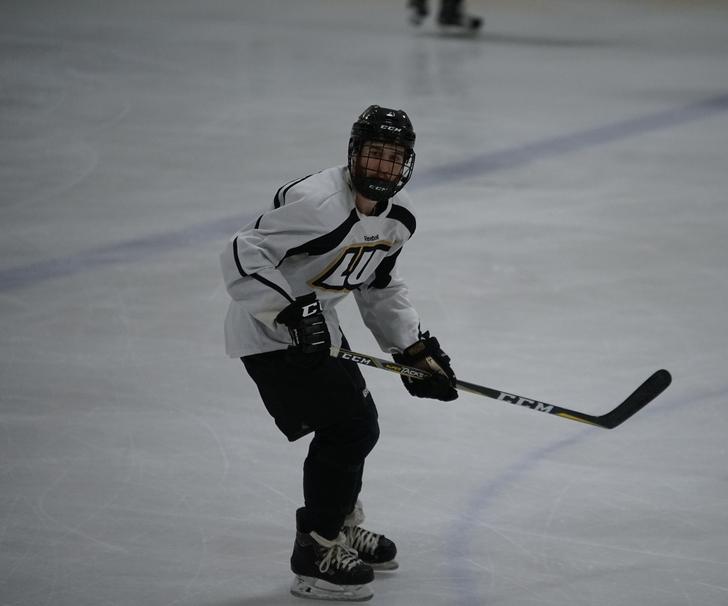 Sophomore forward Jordan Klimovsky skates up the ice and looks for the puck during practice on Sept. 30 at the Wentzville Ice Arena.
Photo by Mitchell Kraus

Lindenwood’s men’s ACHA Division I ice hockey team won one game and lost the other in its two-game series this weekend against the University of Central Oklahoma, the defending national champions, and the No. 1 team in the ACHA.

The Lions faced off against the Bronchos on Friday night at the Arctic Edge in Edmond, Oklahoma. Both the Lions and the Bronchos left the first period with no goals, but during the second period at the 7:05 mark, junior Cade Owad scored the first goal of the game, unassisted. The next goal, ultimately the game-winning goal, came from sophomore Nick Greene, assisted by senior Michael Lozano, according to the ACHA website boxscore.

The Bronchos only scored one goal, during the third period, to leave the Friday night game with a final score of 2-1 Lindenwood, with shots on goal also favoring Lindenwood 32-24. The loss to the Lions on Friday night was the University of Central Oklahoma’s first since they won the national championship during the 2016-2017 season.

Both teams remained scoreless after the first. The Bronchos scored the only goal of the second period. The Bronchos pulled forward during the third period with an early goal, but Lindenwood answered at 12:36 with a goal from junior Jake Townsend assisted by Lozano and Mitchell Riese to tie the game at 2-2.

The game went into overtime with the winning goal coming from the University of Central Oklahoma at 3:45, marking the Lions’ first overtime loss in the regular season. (ACHA boxscore)

The University of Central Oklahoma still sits in the top spot in their division, and the Lions still sit at sixth place with a 6-2-0 record in the season currently.

The Lions will play this weekend at home at the Wentzville Ice Arena against Iowa State University. Puck drops at 7 p.m. on Saturday and 2 p.m. on Sunday.