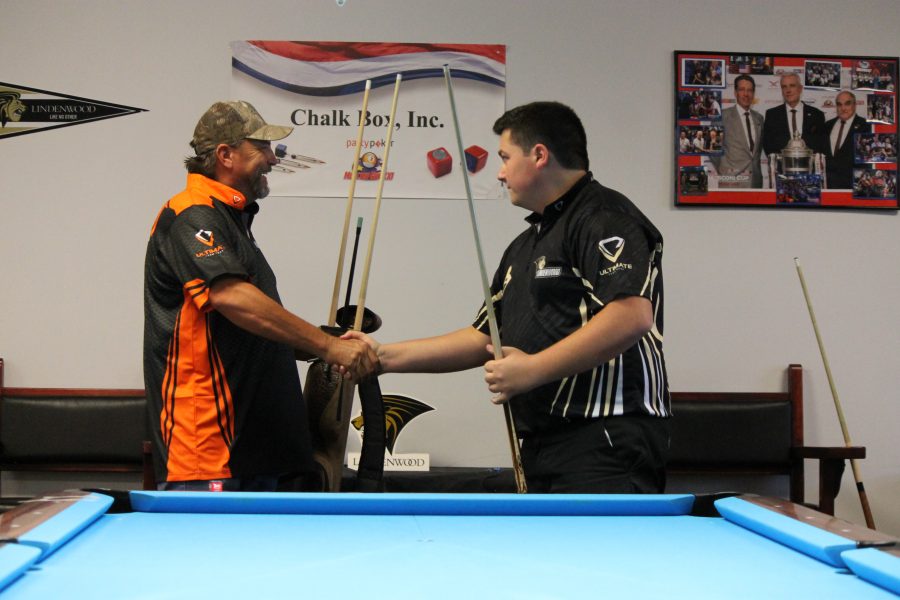 Sophomore Russell Carter shakes hands with his father, Russell Carter Sr., after defeating him in his second match of Lindenwood's 17-10 victory.
Photo by Walker Van Wey

The Lindenwood billiards team defeated another club team on Saturday, and while most Lions saw it as just another opponent, one player looked across the table at his family and friends.

“It was intimidating at first, but I would say I was as competitive, if not more, because I wanted to beat them that bad,” Carter said. “My dad and I actually played in a tournament like a week ago, and he beat me, so this raised my spirits.”

Lindenwood’s home matchup against Biggen’s Breakers from Decatur, Illinois, ended in a 17-10 victory for the Lions despite another early deficit.

“I thought we did great,” said graduate student Alan Oliver. “At one point we were down 4-1, then the next thing I know it’s 10-6 us, and then we must have just caught on that there was a match to play.”

Tina Carter, Russell Carter’s mother and captain of the Breakers, is no stranger to big tournaments, making frequent trips to Las Vegas among other places. However, she said she still finds just as much excitement for the three-hour drive to St. Charles to take on the Lions.

“It’s a big honor for us to get together,” Carter said. “We’re super proud of all of the kids on the Lindenwood team. The things they come up with and the things that they do, you can’t help but be proud of them.”

“It’s fun but it remains competitive,” Wilson said. “If it was going to dissolve into something that was just for laughs, I wouldn’t think it was as fun. It’s all about respect for the sport, which is clearly displayed because they definitely gave us a tussle.”

Another balance the Lions found in the Breakers was their balance of competitive spirit with sportsmanship.

“You can be a fierce competitor without being a fierce person,” Oliver said. “I don’t know about how they are at night, but when they come to Lindenwood, they’re great.”

The Breakers helped reinforce Wilson’s confidence that despite the limited available competition, he has hit his stride when it comes to scheduling opponents.

“I don’t really want to perpetuate the negative image of billiards,” Wilson said. “So if it’s exuberant, competitive people who have the same respect and passion for the sport that we do, like these guys did, that’s exactly who we want.”

The Lions next matchup will be a home matchup against Southern Illinois University – Edwardsville at 6 p.m. on Tuesday, Oct. 10.