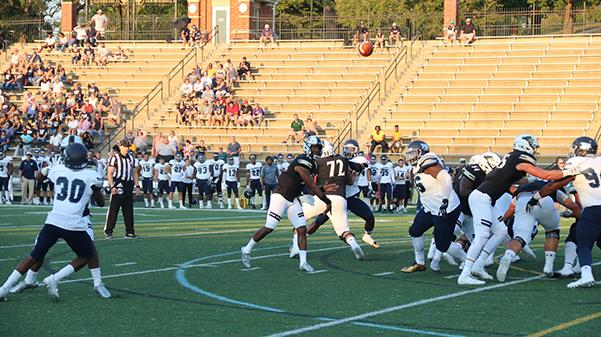 Here are the Lindenwood sporting events on campus Oct. 10 – Oct. 16. Students can earn points by checking into events on the Lindenwood Lion Pride app. Points can then be redeemed for prizes, including free Under Armour shoes and Papa John’s pizza. The app is available for free download on Apple’s App Store and the Google Play store.

The football team (2-4) will look to bounce back from its 40-8 loss to Missouri Western State when the Lions take on Emporia State (3-3) this Saturday. Lindenwood’s main weapon on offense this season has been Deantrell Prince who has 33 receptions for 525 yards and four touchdowns.

The men’s D1 ice hockey team will take on Iowa State (4-1) on Saturday and Sunday. The Lions started the season with six straight wins before dropping their last game to Central Oklahoma 3-2 in overtime.

The billiards team have started the season 4-1. They will look to continue their form when they take on SIUE on Tuesday at 6 p.m and Maplewood on Wednesday at 6 p.m.

The men’s soccer team (6-5) will look to keep its record above .500 when the Lions play Delta State on Wednesday. Lindenwood dropped its fifth game of the season last Sunday when it went down to Fort Hays State University 2-1.

Striker Michele Ganz continues to lead the team on offense. The Italian striker has scored nine goals in 11 games.

The men’s D2 ice hockey team will be attempting to add to its two game winning streak when it takes on Lindenwood-Belleville (0-0) and SLU (4-2) this week. The Lions are coming off the back off two big victories over SIUE, winning 5-2 and 9-1.

The women’s soccer team will be hoping to find its form when the Lions face Washburn (7-4-1) and Emporia State (6-4-2) this week. Lindenwood has lost six of its last eight games. The games are crucial this week as the Lions look to remain in the hunt for the MIAA tournament.

Team captain Becky Roberts has been a bright spot on the season. Roberts has been involved in nine of the Lions 13 goals thus far. Roberts leads the team in both goals and assists, with three and six respectively.

The women’s ice hockey team is yet to record a victory on the season and will be looking to do just that when it takes on Mercyhurst (0-3-1). Sophomore Taylor Girard has been the Lions spark on offense. The sophomore from Michigan has recorded three goals and an assist this season.

The men’s rugby team will kick off its season with a game against the Lindenwood alumni.

The women’s rugby team (3-0) will face the St. Louis Sabres and Tulane University in a doubleheader on Saturday night. The women’s team is coming off the back of a tour of the east coast where they defeated Army 90-5 and American International College 76-26.

The field hockey team (9-2) will be trying to make it three wins in a row when it takes on No. 7 Limestone College (11-0). Limestone will be out for revenge after Lindenwood knocked them out of the ECAC tournament in 2016.