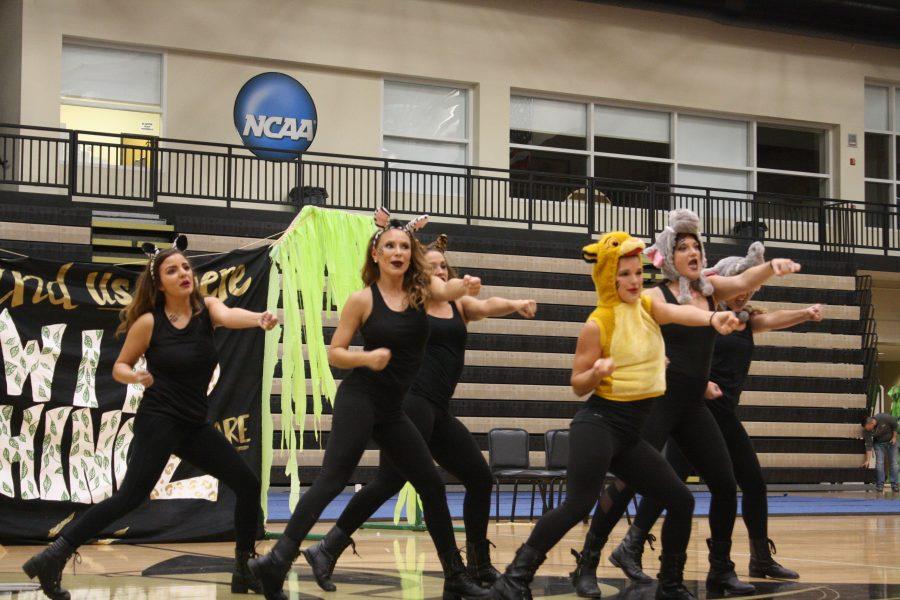 For the fourth year in a row, Delta Zeta won the homecoming lip sync competition.

The sorority was awarded $300 in funds for “best technical performance in a large group” (>60).  Phi Sigma Sigma also received $300 for the small group category (less than 60).  There were also two judges’ choice winners, who each won $150: “Heart of the Lion” went to Phi Delta Theta, and “Most Creative” went to Phi Lambda Chi and Delta Tau Delta.

DZ member Jordan Fowler said each year they try to add something new to their lip sync performance.

In front of a jungle-themed backdrop reading “Find us where the WilD ThingZ are,” DZ members danced to a medley of songs including “Panda” by Desiigner and “The Lion Sleeps Tonight” from The Lion King.

Starting out in leopard print-shirts with former Lindenwood Student Government president Regan Cole playing a safari guide, the sisters gave a vigorous performance which involved animal masks, face paint,and other costumes and elicited cheers from the audience and praise from the judges.

According to Samantha Kennedy, who organized the lip sync, previous competitions awarded an overall winner, but students said this disadvantaged smaller groups, so they created the new categories.

The competition took place at 7 p.m. Thursday in the Hyland Arena and served as a homecoming pep rally. Leo the lion and athletes hyped up the crowd in between performances.

“For us, it’s one of the most fun events we get to put on all year,” said associate student involvement director Nikki Cornwell before the competition, “you see upwards of 700-900 students participating, watching and everything.”

Because the homecoming theme is “Welcome to the Jungle,” Cornwell reckoned many participants would use the Guns N’ Roses song of the same name, but said some decided against it because they thought it would be unoriginal.  The song did appear in multiple routines, along with “The Bare Necessities” from The Jungle Book, “Anaconda” by Nicki Minaj, “Born to be Wild” by Steppenwolf, “Eye of the Tiger” by Survivor, “Panda”, and music from The Lion King.

Fraternities Delta Tau Delta and Phi Lambda Chi, the last group to compete, came back from technical difficulties to win the “Most Creative” award.  They began their routine lip syncing “Part of your World” from The Little Mermaid and ended with a re-enactment from the beginning of Indiana Jones’ Raiders of the Lost Ark.

The green-clad members of Phi Delta Theta put on a humorous performance, winning them the “Heart of the Lion” award.  Amidst jokingly dancing to songs like “Fireflies” by Owl City and “I Will Survive” by Gloria Gaynor, the brothers formed cheerleading pyramids lifting members with the fraternity letters painted on their chests.  Their lip sync concluded with wheelchair-bound Andrew Honerkamp rolling out to “Ridin'” by Chamillionaire.

As the smallest group, four members of the Veg Society danced to “Don’t Go Breaking my Heart” by Elton John and Kiki Dee.

The Dance Teams’ performance was about a safari gone wrong and featured an inflatable dinosaur costume, that deflated throughout the performance.

The Black Student Union enthusiastically lip synced to a mashup of various songs while dressed in all black.

The event was concluded with the presentation of the homecoming court, a performance by the men’s and women’s dance squads and the announcement of the winners.  Each category was given a giant check, and they can use the money they won for their organizational funds.