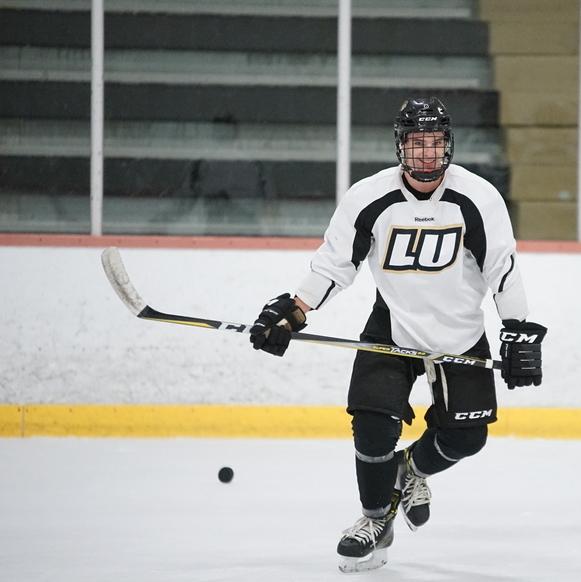 Austin Wilk smiles and skates with the puck on practice at the Wentzville Ice Arena on Sept. 30. Wilk is the assist leader for the team, with five assists according to Lindenwood Athletics.
Photo by Mitchell Kraus.

Recently, the men’s ice hockey ACHA division I team moved up in the rankings, breaking the top five and landing at the fourth spot in its division. Now it faces another high-ranked team, Iowa State.

The Lions beat the defending national champions, the University of Central Oklahoma, on the road, giving the Bronchos their first loss of the season, according to the Lindenwood Lions athletics. The loss sent the Bronchos down into the second-place position, and Minot State advanced to the first-place spot.

Lindenwood will meet the sixth-place-ranked Iowa State University Cyclones this weekend at the Wentzville Ice Arena to kick off a four-weekend home game stretch.

Iowa State University has won five of its past six games but fell to the University of Oklahoma 4-1 at home on October 7. (Cyclone Hockey)

Lindenwood will play Saturday evening at 7 p.m. and Sunday afternoon at 2 p.m. Both games will be played at the Wentzville Ice Arena and available for live streaming on YouTube.