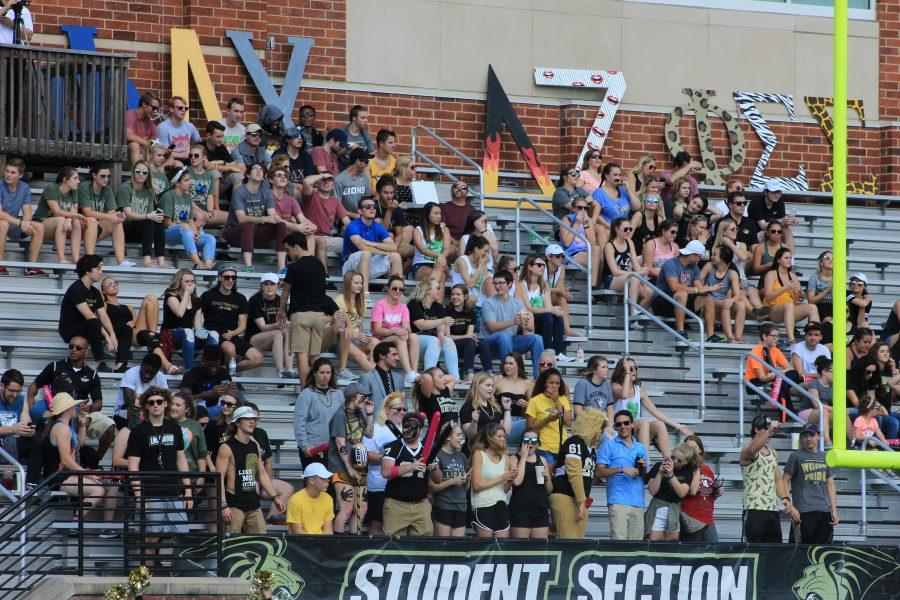 The student section cheers on the Lindenwood football team at the homecoming game on Oct. 14.
Photo by Lindsey Fiala

Lindenwood University celebrates its Homecoming week from Oct. 10-15. According to the Lindenwood website, the 2017 Homecoming theme was “Welcome to the Jungle,” and honors the classes of 1967, 1992, and 2007. The highlighted events of the week included the lip-sync competition, Homecoming parade, tailgate and Homecoming football game.
HOMECOMING RECAP

Lindenwood held its annual homecoming lip sync competition for student organizations on Thursday evening, Oct. 12, at the Hyland Arena on campus. Different student organizations including the Black Student Union, Greek Life, Veg Society and others participated in the event by preparing a dance with music, which they lip-synced with. Different awards were given out, like Most Creative Performance, which went to Delta Tau Delta and Phi Lambda Chi.
The main award for the large groups went to the women of Delta Zeta for the fourth year in a row.
Junior Delta Zeta member Chloe Kersten said, “It feels really awesome to win because it’s our fourth year in a row and we all tried really hard, and it was really cool.”
Along with awards presented, the event organizers added a few crowd-pleasers like a dance-off with Leo the Lion and different prizes given away to students in attendance.

Students and their family members enjoyed a day out by watching football and eating pizza, nachos and sandwiches at Lindenwood’s Homecoming tailgate from 11 a.m. to 1 p.m. on Saturday, Oct. 14.

There were many activities people partook in, such as throwing beanbags and playing ladder golf. Dogs were also welcome, and some people brought their furry friends along with them. There was also a face-painting booth where people could get Lions logos.

Some parents came from faraway locations to be with their children. Darlene Sellers arrived from Frisco, Texas, to see her son Caleb play, while Melinda Gurnea traveled down from New Lenox, Illinois, to see her son Derek.

With Harlen C. Hunter Stadium filled with cheering fans, the Lindenwood football team lost its Homecoming game to the Emporia State Hornets 41-30 on Saturday. The Lions’ next home game will be against University of Nebraska at Kearney on Oct. 28. To read more about the game in our game recap, click here.