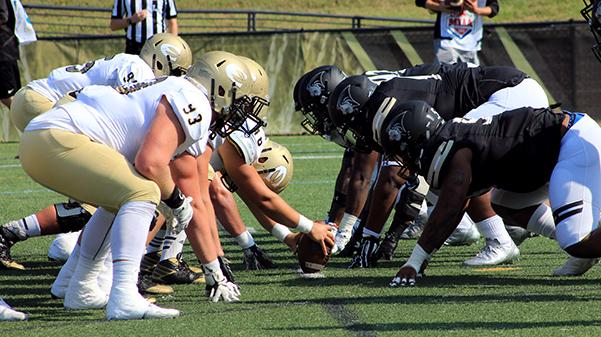 Lindenwood prepares to face off against Emporia State at the Homecoming game on Oct. 14.
Photo by Lindsey Fiala

Lindenwood lost to Emporia State on Saturday by a score of 41-30. The day was action-packed from the pre-game festivities, all the way up to the final whistle.

President Michael Shonrock, who was previously the president at Emporia State University, had only one thing to say when asked whom he was rooting for at today’s game.

“It’s always great to be back at Lindenwood,” she said “Wearing a MIAA shirt means I have to be neutral, but that’s very hard for me. I’ll be a Lion until I die.”

Like the rest of the stadium, they were ready for a great game.

During the first quarter of the game, Emporia took the lead with two touchdowns. The first came from tight end Denzel Strong with 13:45 left in the quarter. Ten minutes later, teammate Justin Brown made his way to the end zone as well.

Lindenwood rose to action in the first play of the second quarter. Running back Calen Campbell scored the Lions’ first touchdown with an impressive 49-yard run.

The touchdown run also took Campbell over 1,000 career rushing yards and finished the game at 1,025 yards.

The Lions defense held off any more scoring drives the rest of the second quarter, as did Emporia, bringing the game to 14-7 at the half, something head coach Jed Stugart was proud of.

“We talked about not giving them big plays and making them work down the field,” he said. “I thought the defense did a good job of that.”

After three straight completed passes and a quick eight-yard run, Lindenwood quarterback Najee Jackson scored the first touchdown of the second half in the 10th minute of the third quarter, tying the game.

The touchdown brought Jackson to a total of 11 for the season.

Emporia retaliated three minutes later after a 15-play drive, once again taking the lead after a nine-yard run from Dillon Lohr.

A chaotic fourth quarter started with a 20-yard field goal from Lindenwood kicker Travis Spraul which brought the game to 20-17, the closest it would be.

There was  a controversial call the following drive. The Hornets offense had thrown the ball a receiver on the far side of the field and he caught the ball and dove for the first down line and dropped the ball. Initially, the pass was ruled incomplete. After the referees conversed, they called it a completed pass, and couldn’t discuss a fumble, since the whistle had been blown dead.

The Hornets running back ended up finishing the drive off with a touchdown to expand the lead to 27-17.

Although the Lions scored two more touchdowns in the fourth quarter, they were unable to catch up to Emporia and ended the game at 41-30.

Though the Lions did not get the Homecoming win, coach Stugart is sure that the members of the Lindenwood football team still have the drive they’ll need for the rest of the season.

“I know the fight’s there,” he said “This team doesn’t have the eyes or the looks like they want to quit. I love these kids. I love how they fight.”