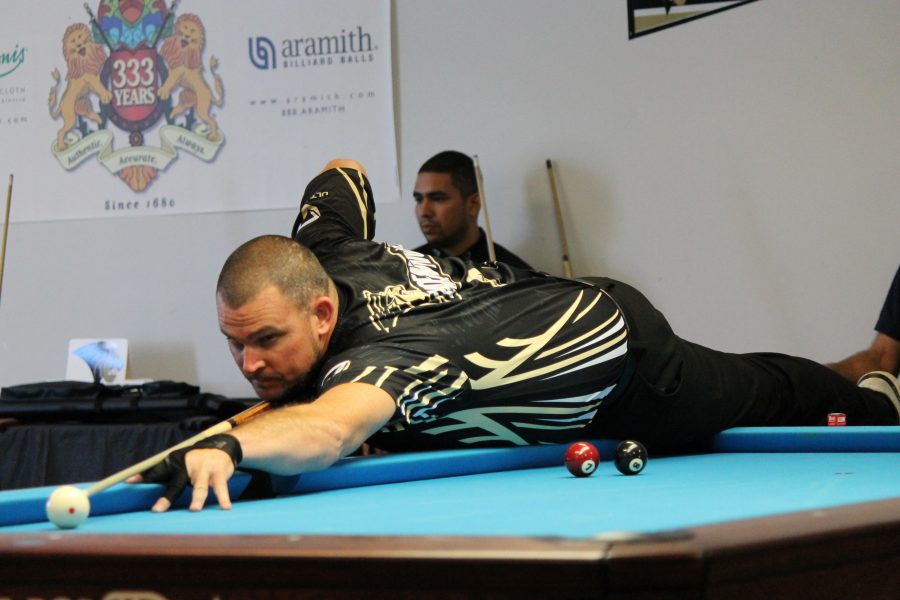 Brandon Jordan stretches across the table during the first set of his two win tournament.
Photo by Walker Van Wey

The Lindenwood billiards team found itself in a deficit late in Sunday’s match against Salvo’s Slayers,, but the Lions walked away with the 14-13 victory.

Head coach Mark Wilson invited former Lindenwood Lion Chris Salvo and his club team to Lindenwood for a “best to 27” tournament. After putting together the strongest team he could, Salvo’s Slayers nearly walked away with the victory.

“Chris comes in about once a year,” Wilson said. “He was telling me how good his league team was, and he brought a good, solid crew to compete with us. It was a good test for us.”

A reunion with the former teammate exceeded the expectations for the Lions.

“I played with him for his last year and a half; it was nice seeing him again,” said senior Brandon Jordan. “It was interesting because a lot of the times when people leave the program, they lose their stroke, and they don’t play as much. Seeing Chris play was a pleasant surprise.”

Both sides enjoyed the reunion, but camaraderie was quickly cast aside.

“It was really exciting to see we’d have competition we’ve had all semester,” said senior Carly Fristoe. “It kind of gave us a competitive edge that we haven’t seen since Durbin.”

The edge really kicked into gear midway through the match when the Slayers took a 11-9 lead.

“At that point when I looked down the lineup, and the rest of the matches were all tossups, and [the Slayers] were gaining confidence, and we’re looking like a drunk stumbling through, just trying to see straight, it got a little scary,” Wilson said.

The Slayers held their lead until late with contributions from all members of the team, and no Lion went winless.

“I can’t ever remember every member of the team chipping in with wins,” Wilson said. “When you look up and down the lineup, there’s really no awful players.”

In the two closing matches, Brett Snowden sank the final shot of his set to put the Lions ahead and the victory out of reach for the Slayers.

“Everybody’s gunning for us,” Wilson said. “It’s one thing to get to the top; it’s another thing to stay at the top. I’m glad we’re recognized a certain way that people look at you in a way that they bring the strongest team they can possibly assemble.”

The Lions’ biggest threat yet comes on Thursday against club team Teachers.

“Teachers will be a threat,” Wilson said. “It would damn near takes the pros or something as solid as Teachers will bring. I don’t want to lose, but I’m not going to shape it so we always win. Thursday’s going to be tough.”

The matchup will be at 6 p.m. on Thursday at the Lindenwood billiards room.