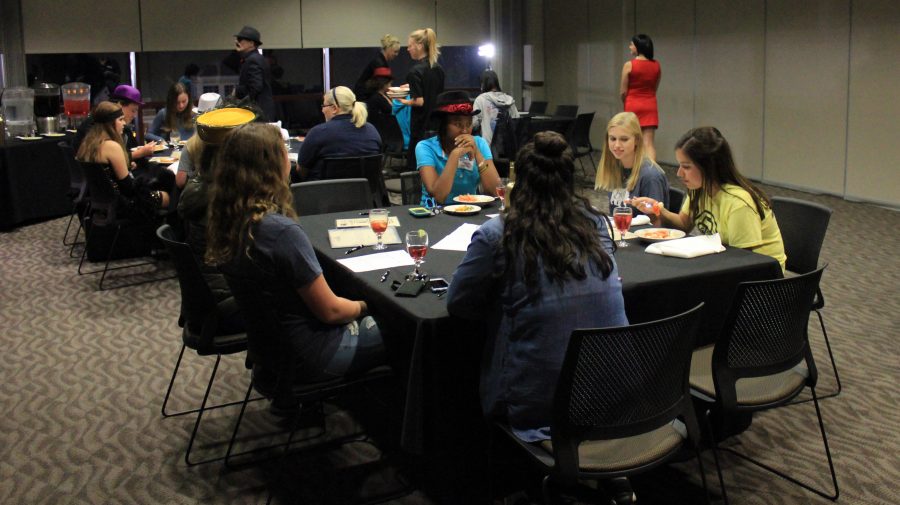 Students enjoy their appetizers as they wait for the murder mystery to begin.
Photo by Lindsey Fiala

Lindenwood’s Campus Activities Board hosted an interactive murder mystery dinner on Oct. 18  in the AB Leadership Room in the Spellmann Center which got participants out of their seats and solving a crime.

The show was put on by The Murder Mystery Company, a nationwide company that allows everyone in attendance to participate in solving the mystery while enjoying a three-course dinner.

Six students were randomly picked to play the suspects and were all given hats and name tags which corresponded with the character. Each suspect was also given a binder with information about the character which could be shared with others during two different investigative times.

The scene was set at a speakeasy in the 1920s. Two employees with the company kicked the show off. Longtime employee Eric Van Horn, who played the victim and speakeasy owner, Lou Zar, and then doubled as the detective, walked around talking to students as the owner. He was accompanied by his coworker Megan Reed, who played his girlfriend Amanda, throughout the beginning of the show.

Noel Burke, who played a Russian heiress to a sausage company and undercover hit woman, said the show was an awesome experience.

“It was funny [being a part of the show],” Burke said. “I couldn’t figure out the accent so then I just dropped it. I tried to get into the character, but all I could say was that I love sausages.”

Some of the other characters included Gus the Milkman; Lou’s assistant, Trish Fish; and Lou’s second in command, Dixon.

Each character was partnered up with another student as a team, the goal being to figure out who killed Lou and why.

Every character was a suspect and was under investigation throughout the night.

The show came to an end when teams were allowed to deliberate as a team on who the killer was.

“It really kept me on my toes; I liked the suspense of it,” Calloway said.

“I’ve done over 200 shows,” Van Horn said. “Tonight [compared] the same as other shows. Whether it’s 300 people or 15 people, it’s the game. People were involved, they were up on their feet investigating, laughing and having a good time. We accomplished our goal, and that’s to entertain and to make people have a good time.”