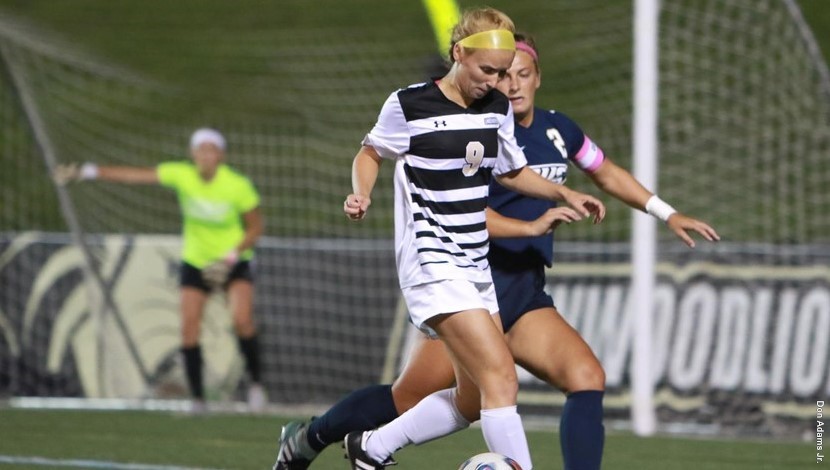 In a file photo from 2017, Alyssa Houck controls the ball near a defender in a game against University of Illinois-Springfield.
Photo by Don Adams Jr.

The Lions started the game strong with six shots in the first 20 minutes of the game, but were unable to put any in the net.

In the 38th minute, the action opened up as Lindenwood drew a penalty kick after being taken down in the box by a Missouri Southern defender. Sammi Gregory’s penalty kick was saved and the game remained scoreless.

Just after Lindenwood missed on its chance, Missouri Southern State converted, as late in the first half the ball was put past goalkeeper Mary McGilvray off a cross for a 1-0 lead.

That would be the score headed to halftime.

Missouri Southern State carried the majority of the play in the second half. McGilvray did everything she could to keep the Lions in the game. She made a couple saves while facing a barrage of shots.

Lindenwood wouldn’t go away easily. In the 85th minute, Jordan Wipke sent a corner kick into the box, but it was cleared away by a Missouri Southern State defender.

The game would end 1-0 and a win for Missouri Southern.

Lindenwood is now 5-10-1 on the season and 2-6-1 in MIAA play. Missouri Southern State picked up its third victory on the season.

The Lions’ next game will be at home on Friday, Oct. 27, against No. 1 ranked University of Central Missouri. Kickoff is set for 7:30 p.m. at Harlen C. Hunter Stadium.