12,000 expected to show up for Dark Carnival 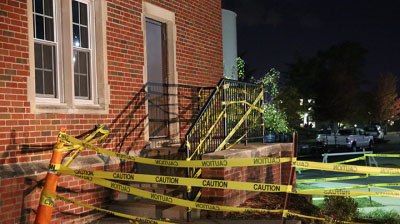 As part of Lindenwood's annual Dark Carnival, Cobbs and Irwin halls will be converted from dormitories to haunted houses for the night.
File photo by Carly Fristoe.

Students know it’s fall at Lindenwood when the leaves begin to change, the temperature drops and dormitories double as haunted houses.

Freshmen or transfer students in their first year at Lindenwood may not know about the Dark Carnival, but for the past six years, students and staff have transformed old campus into a family-friendly Halloween-themed event.

Every year, thousands of students and members of the community show up for the free carnival, which is made possible by local businesses and student organizations.

The Dark Carnival has come a long way from being a resident director’s idea to become a tradition for the university and community.

For the first two years, it consisted of only the haunted house, and attendance was between 250 and 500 people. After that, carnival games, snacks and local businesses were added to the experience. By 2016, more than 8,000 people attended.

Last year was the first year the carnival went from a student-driven event to a university-sanctioned, community event, said Bryan Stone, who has coordinated the event for the past four years. This means the funding for the carnival is now provided by sponsors and donations from local businesses who have booths at the event.

“Moving the event to university-driven, I knew we had to raise the bar and incorporate an entertainment aspect, add a second haunted house and give it the carnival feel,” he said.

This year the carnival will be held from 7 to 11 p.m. on Wednesday, Oct. 25. It will feature about 88 booths and live entertainment from Nashville band 8 South. Two haunted houses will be open to people, in Irwin and Cobbs halls. Stone said they are expecting attendance to reach 12,000 people.