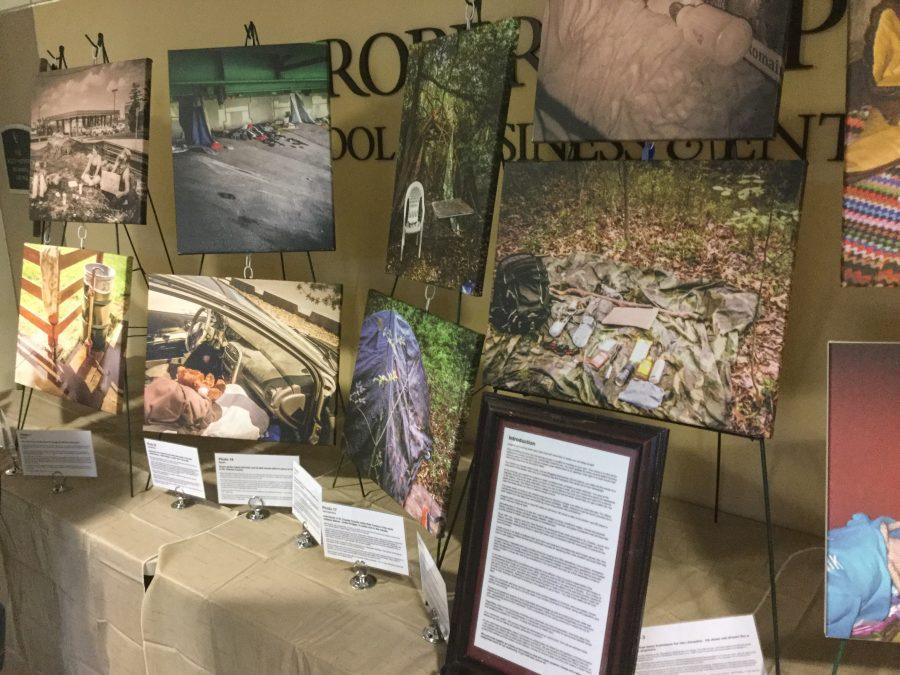 Homeless people in the area were given cameras and took photos of their communities.
Photo by J.T. Buchheit

St. Charles is not all flowers and sunshine, and Sts. Joachim & Ann Care Service wants to bring this to light within the community.

The “In Plain Sight” project was held in Harmon Hall this week. This organization serves to help homeless people in St. Charles, Lincoln and Warren counties find shelter, food and clothing. For this project, the organization contacted homeless people who had sought help with them before and gave them disposable cameras to take pictures of how the homeless population lives. The pictures deemed the best were on display at the exhibit.

“In Plain Sight” is a traveling exhibit that came to Lindenwood to expand awareness among the young population of St. Charles. Karen Grant, the organization’s director of development, said people need to realize that homelessness is right in their own backyard.

“We live in a really nice county, but homelessness and poverty, there’s really high rates in it,” said Haley Woolbright, a student in a nonprofit class who is helping with the project. “This is a great way to make people see it right away, like, ‘Oh, I didn’t even notice.’”

Getting homeless people to participate in the project was no easy task, as most of them prefer to remain out of sight.

“People want to stay hidden, so it was a huge undertaking because we had to physically go out there, hand out cameras and get folks to agree to take part in it and to get releases from all of them so that we have permission to use their images,” Grant said.

Despite the stereotype of homeless people being lazy or drug addicts, student Kyle Kisner, who also worked on the project, said that is rarely the case.

“It’s mental health, it’s a series of unfortunate events,” Kisner said. “Most people are just one major breakdown or one major firing away from ending up in that situation.”

Grant said the most common people their organization helps are single parents, people with deaths in the family who now must get by with one income and people with illnesses who have racked up hospital bills.

Sts. Joachim and Ann Care Service has many services that can help homeless people, including housing assistance, children and family development, workforce development, a food pantry, Adopt-A-Family and street outreach.

The organization and the students hosting the exhibit took on this project to increase the general public’s visibility of the plights of homeless people, and Lindenwood served as a way for the organization to expand its radius and find a more diverse environment to spread its mission to end homelessness and hunger.