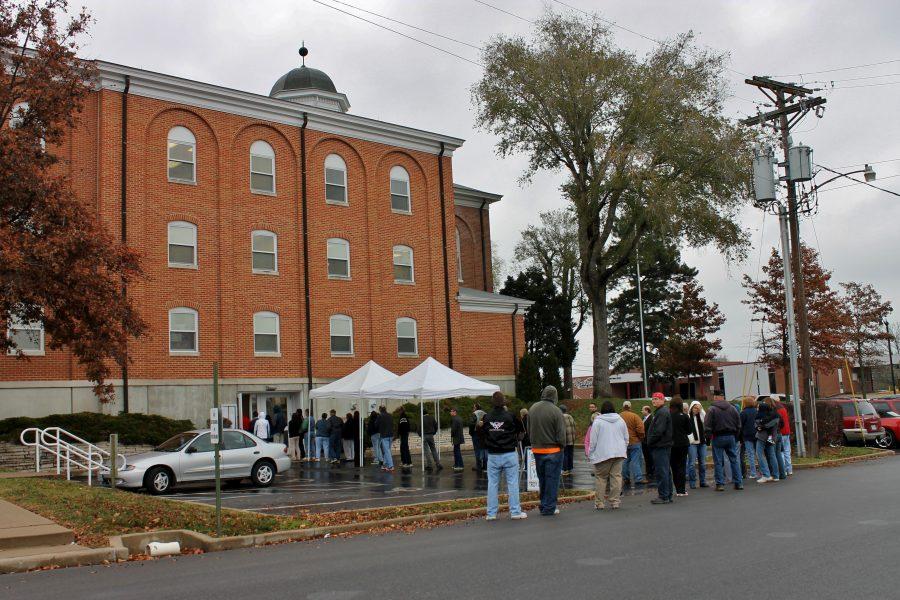 November 6, a day which the whole nation awaited for so long.

Election Day made many people in Lincoln County, Mo go to their polling places: Troy City Hall and Troy Courthouse during the mid morning. Even rain and a long waiting time could not keep passionate supporters from voting for their next president.

The outcome of a random sampling of around ten citizens was as expected in a mostly Republican state; showing Romney favored by most. Nobody said he or she was in favor with the Democrat incumbent, Barack Obama. The majority supported Mitt Romney,  the Republican candidate and only a few voters were Independent.

Jim Beauchamp from Troy, whose party affiliation is primarily Republican, voted for Romney. Beauchamp stated on Obama´s term: “I haven´t seen any change” and Romney, therefore, “seems like the right choice.”

Luke Whiston, Republican and Romney voter from Troy, also criticized Obama. He stated: “I don´t like Obama´s policies. They spend too much money.”

Ryan Wollolk, a Republican from Troy, stated: “I have no faith in the current president.” Wollolk voted Romney and said it is “Obama´s general policies which I don´t like.”

Many people from Lincoln County, MO hope for change. There are major issues why they support Romney.

Julie Ruyle from Troy is Independent and votes by the candidate. She said: “I would rather not say what candidate I will vote for,” but she supported Romney when she said: “Pro-Life is a big issue for me. This is probably one of the biggest issues.”

Strong opinions about the issues were not always based on the presidential debates which were on television during the last weeks.

Dana Manar, an Independent from Troy, said: “They were always on, but I was not always looking at the television.”

Also Ruyle said: “I did not follow the debates.”

Whiston, on the other hand, said: “I watched all of them.”

Not thinking about national issues was Phillip Priest, a campaign worker and paramedic from Troy with no special affiliation. Even more, he advertised “Proposition Life Matters” in front of Troy City Hall. He said it was his “third time working as a campaign worker.” He also said: “I try to improve response times by introducing the compassionate billing.” His aim is that people get faster help when they get insured. This requires a minimal tax raise which will go to the ambulance, however, the upcoming fees when using the ambulance will decrease.

For reaching many people´s attention, another campaign worker will support him later the day. He said: “I will stay out here all day. Such as he tries to reach his goal, the nation does. People want their president of choice to win, even if the cost is standing outside in the rain.

Manar said: “It is important for everyone to get out and vote.” Every vote counts and can make a change.