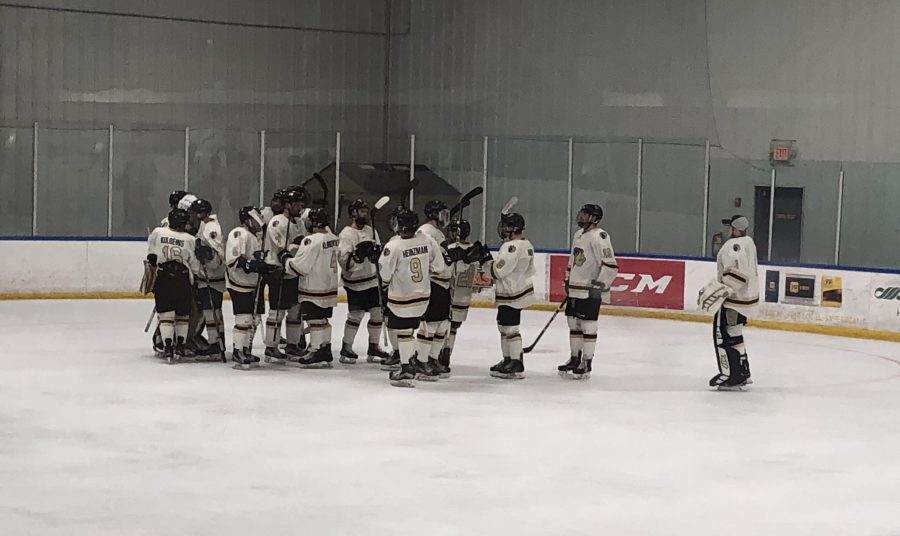 Lindenwood Lions hockey celebrates their third win in a row against the University of Oklahoma at home at the Wentzville Ice Arena last weekend on Oct. 21. Number 9, forward Tommy Heinzman, had two assists in one goal during their match up.
Photo by Madeline Raineri.

The Lindenwood men’s hockey team will play its third home weekend series Oct. 27 and 28 against the University of Illinois.

The games will be the first time the teams will meet this season; the next time will be the Lions final games of 2017 at the Illinois Ice Arena in Urbana-Champaign the weekend of Dec. 1 and 2.

According to Illini Hockey, the team currently sits in the sixth spot in the ACHA Division I ranking with a record of 8-0-0 with Lindenwood ranking number three with a 9-0-2 record.

Last year, the Lions and the Illini met for four games as well. Lindenwood swept them at home last year on Nov. 11 and 12 scoring a total of 10 goals in the two games. When they met again Jan. 20 and 21, the Lions won the first game of the series and fell in a 4-3 overtime loss for their final meeting of the season.

The Lions will go into this weekend with a three-game winning streak behind them. Lindenwood lost one game against the defending national champions, the University of Central Oklahoma, in overtime 3-2. Their second loss occurred the next weekend against Iowa State University in shootouts 2-1, and they are also 2-1 in shootouts, according to Lindenwood Student Life Sports.

Lindenwood will face off this weekend with the Illini on Friday and Saturday. The game on Friday will begin at 7 p.m., and the game on Saturday at 4 p.m. at the Wentzville Ice Arena. Lindenwood’s games are also available to be streamed on YouTube.