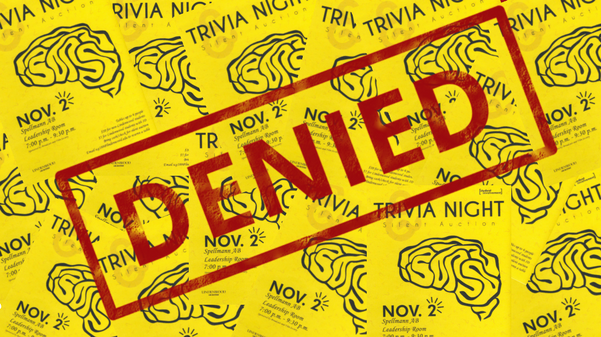 Student Involvement puts student clubs and organizations through the wringer when it comes to creating flyers for events. This sometimes ends in a flyer being denied, forcing the organization to start from scratch.
Graphic by Kearstin Cantrell

Everybody loves flyers. They communicate vital information about upcoming events and other gatherings.

But when your flyer fails to do what it is supposed to do — communicate said events — then it fails its intended use altogether and is nothing more than a useless piece of paper. The key to making a good flyer is to have a good design, which requires a skilled designer.

Now, normally on Lindenwood’s campus, most clubs have members that are skilled enough to make an effective flyer. But before they can put them up on campus they first have to get it approved by Student Involvement…two weeks in advance.

After submitting a flyer, an organization may have to start from scratch if the design is denied by Student Involvement. This may happen for a reason as small as not having a Lindenwood logo on the design.

Of course, if you don’t want to wait two weeks, then you can let Student Involvement design your flyer for you with less-than-stellar results.

For example, National Broadcast Society is holding a trivia night on Nov. 2, and to advertise this, they had Student Involvement design a flyer for them. What they got back was a mess, to put it lightly. Not only was the “sponsored by” written in a hard-to-read cursive font. It was also in what looked like a font size of four. How is this organization supposed to advertise with this flyer if people can’t even read part of it?

Again, this wouldn’t be an issue if Student Involvement just let clubs make their own flyers without having to submit them two weeks in advance for approval.

More to the point, why does it take Student Involvement two weeks to approve a simple flyer design?  I don’t see the point of even having to get a flyer approved as long as it doesn’t have anything offensive on it.