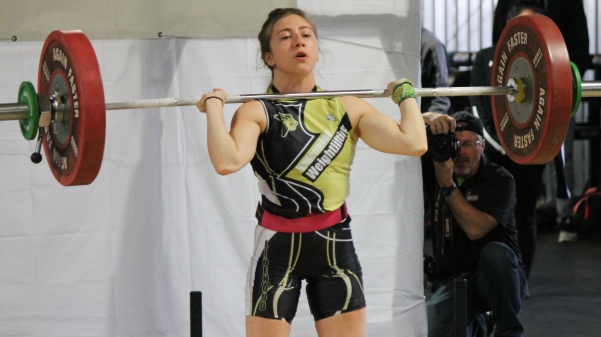 Rachel Schwartz lifts the final time at Saturday's Uncharted meet in St. Charles. She was the lone medalist of Lindenwood at the meet.
Photo by Walker Van Wey

The Lindenwood Olympic weightlifting team competed in its final meet of 2017 on Saturday aiming for national qualifications and personal records.

The Lions had a rare local meet at Uncharted Crossfit. Lindenwood sent 24 lifters over to compete with bigger goals than medals in mind.

“A lot of our guys didn’t cut weight or anything because this competition was more or less for people trying to qualify for nationals,” said assistant coach Austin Rodriguez.

Junior weightlifter Rachel Schwartz not only matched her personal record but also walked out as the only Lion to earn a medal.

Early-morning nerves and seemingly low energy were early but irrelevant worries for Schwartz.

“Everybody gets nervous for these,” Schwartz said. “You’re really competing with yourself out there. I know at first I had to get plenty of caffeine in me because Austin kept saying, ‘More energy! More energy!’ so I was worried, but adrenaline helps a lot. You also feel more powerful when the whole crowd is there too.”

Because Lindenwood is no stranger to winning big, with national championships in 2014, 2016 and 2017, Schwartz’s lone medal may have shocked many, but the Lions walked away with a sense of accomplishment.

“All the guys did really well,” Rodriguez said. “It was the first competition in a long time, and we didn’t have any bomb outs, so that was good.”

The Lions also chalked up the Uncharted meet as a successful bonding opportunity as a team.

“Honestly, it’s funny because we had everybody deep,” Rodriguez said. “It was a lot more exciting of a local meet since we had the whole team there to cheer everybody on.”

The Lions’ next meet will be the national championships in February of 2018.