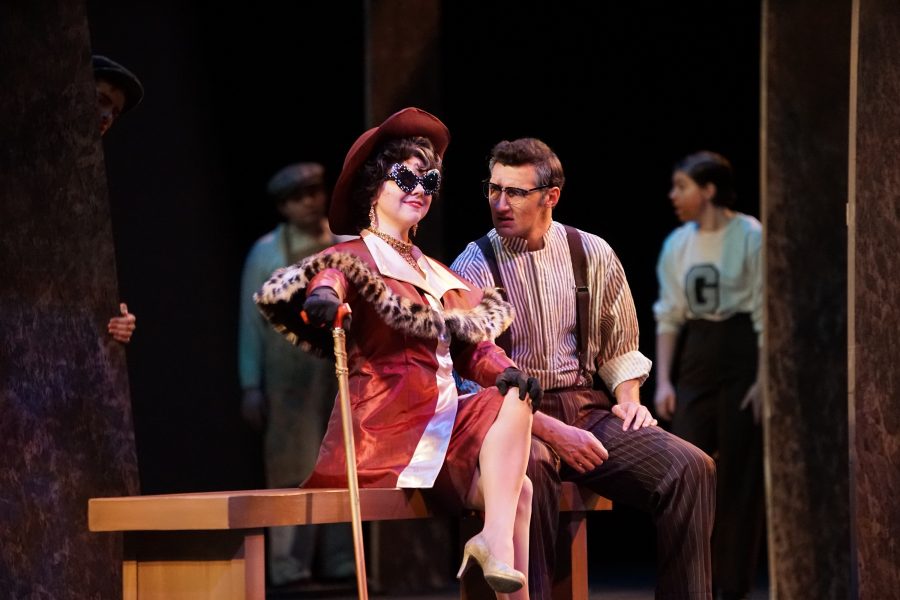 Brie Howard as Claire Zachanassian and Hunter Fredrick as Anton Schill during "The Visit" dress rehearsal on Oct. 28 in the Lindenwood Theater. The show opens on Thursday, Nov. 2, and runs through Nov. 4.
Photo by Mitchell Kraus

A tragicomedy “The Visit” takes over the Lindenwood stage this week with a minimalistic set, haunting masks, dashing 1950s costumes and a message about morals that will leave theatergoers thinking.

“I tend to be drawn to shows that have a social message underneath it or is going to leave an audience talking and questioning what happened and trying to make connections to real world circumstances,” said Rosalia Portillo, the director of the production.

According to samuelfrench.com, “The Visit” originally was written in German by Friedrich Dürrenmatt and translated by Maurice Valency. It tells a story of Claire Zachanassian, a wealthy woman who returns to her hometown offering an unimaginable amount of money to help her debt-ridden town. However, she has one condition: She wants one of the villagers dead to get justice for the disgrace the man caused her.

Portillo, who is directing this as her master’s thesis project, said this dilemma in the story raises a lot of ethical questions. This show is known for having various themes, but the one concept Portillo focused on was dehumanization.

“It’s easy to judge someone or to look at a very specific action that someone took and to say that that defines them, instead of looking at the whole of someone’s life and what drives them to a certain action,” she said.

Senior acting student Hunter Fredrick portrays Anton Schill, the man whose life is wanted in the play, which will be the last character he will perform on Lindenwood’s stage.

He said the play “boils down” to one question: What do you value?

“There is a sense of what do you value and how does your past come back into your present?” he said. “And so with Anton, it’s, ‘OK, how do I accept the flaws of my past and how do I apologize for that? How can I redeem myself from that? How do I deal with that?”

Musical theater student Brie Howard portrays Claire Zachanassian in the production, and she said there is more in her character than “avenging fury.”

“In the rehearsal process she has grown in my heart as this woman who has been really hurt and feels the desire to hurt back,” she said.

Portillo said the matter of morals in this show is not black and white, and Fredrick agreed.

This year’s Lindenwood theater season offers a set of distinctive shows, each giving something new both for theater students and audiences. The first show, “Avenue Q” last month showcased puppetry theater, and now “The Visit” will integrate use of masks.

Portillo said the masks are “a choral element” working as a representation of how things shift within the town and its people throughout the play.

Fredrick said the masks are “haunting.”

“When you see the mask the personality of the actor behind it is completely gone,” he said.

“It’s interesting how people’s bodies change because getting in those masks, you put on the personality of the mask,” she said. “You don’t have to make your face. You don’t have to make any kind of reaction time. It’s all in your body so your whole body is having to act for you or do whatever it is.”

Natalie Turner-Jones, the movement director of the show, said movement is essential when working with masks.

“Mask work is a process that requires guidance to explore its use, understand its impact on the body, and for its integration into the story of the play,” she said. “Movement directors facilitate the successful establishment of an ensemble capable of functioning as a chorus.”

Besides the masks, Portillo said it is the narrative of this play that makes the show stand out in how it is constructed and in the way of creating a guessing game for the audience.

“It’s a story told in a different way that you would traditionally see a lot of times,” she said. “And I think that fits in with the overall season; we’re seeing a lot of different narratives than we’ve seen before.”

Portillo said she has always liked more minimalistic production style, which is how “The Visit” has been designed with simple sets but using sounds, lighting and costumes “actively.”

“I like the idea that less is more and things are there for a really specific purpose and … these choral elements and the movement work that lives in a space that is open and allows for the movement as a more minimal, abstract world that we’ve built,” she said.

Fredrick said that even though there is theatrical entertainment value in this show, it is the message that will stick with the audiences when they leave the venue.

“It’s going to make you think at the end,” he said. “It’s going to leave you very conflicted in a lot of your own thoughts because at the end of the show, you are going to be changed.”

“The Visit” runs in The Lindenwood Theater at 7:30 p.m. on Nov. 2-4. Students with valid Lindenwood IDs can get two tickets for free. For more ticket information, call the Lindenwood Box Office at 636-949-4433.