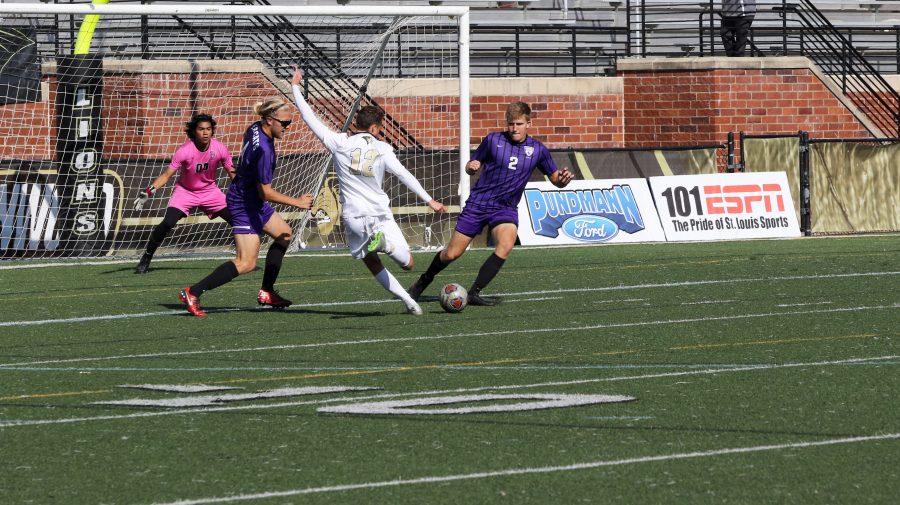 Ryan Butchart, No. 12, shoots ball through the legs of defender Alek Santo, No. 2, in 5-0 win over Southwest Baptist University.
Photo by Kyle Rhine

Coach Hutter was not happy with the team’s performance to start the game.

“We were sleep walking for the first 20 minutes of the game,” Hutter said. “We have yet to play a complete game this season and it has cost us.”

In the 27th minute, the Lions scored off an own goal on a corner kick giving Lindenwood an early 1-0 lead.

Gaspar Alvarez made it 2-0 in the 35th minute scoring from 12 yards out with the assist coming from Adnan Mahmutovic. This was Alvarez’s third goal on the season.

Lindenwood erupted in the second half scoring three goals. The first goal came from Steven Lilako who dribbled past the Southwest Baptist goalie Matt Garza extending the Lions lead to 3-0 in the 70th minute.

Lilako would score his second goal of the game in the 80th minute heading the ball on a cross from Ian Barger making it 4-0. Lilako now has three goals on the season.

The Lions scored their fifth goal of the game in the 84th minute on a strike 26 yards out from Andres Gutierrez for his first collegiate goal.

Lindenwood outshot the Bearcats 30 to three with thirteen shots on goal. While Southwest Baptist only had one shot on goal according to Lindenwood Athletics.

The Lions had 15 corner kicks throughout the match and the Bearcats only had two.

With this win, Lindenwood improves their record to (9-7) on the season and will play their season finale on Sunday against MIAA conference opponent Northeastern State University at 4:00 p.m. at Harlen C. Hunter Stadium.