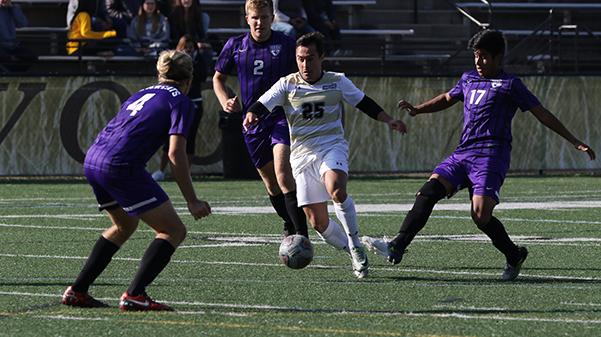 Lions midfielder Theygor Alho, No. 25, dribbles past three Bearcats players: No. 4 Logan Santo, No. 2 Alek Santo and No. 17 Angel Torres in the Lions' 5-0 win against Southwest Baptist University on Friday.
Photo by Kyle Rhine

These teams met back on the 29th of September with Northeastern State defeating the Lions by the score of 2-0 in Tahlequah, Oklahoma.

Northeastern State has a 10-game winning streak, and with a win against Lindenwood it would have a share for first place in the MIAA conference with Fort Hays State.

Lindenwood currently sits third in the conference with a record of 4-3, and with a win on Sunday it would give the Lions their 10th win of the season.

Freshman Michele Ganz leads the Lions in points and in goals with 11 goals on the season and a total of 25 points. Ganz only played 22 minutes in the team’s win on Friday because of an injury in the first half.

Goalie Tim Licht captured his fourth shutout on the season Friday as the sophomore goalie has a record of 8-3-0 on the season. Licht has allowed less than a goal per game with an average of 0.8 goals allowed according to Lindenwood Athletics.

Lindenwood has had four losses this season, all by one goal, and coach Carl Hutter feels this season could have turned out differently.

“Every game we’ve played this year that we’d lost we really could have won other than Rockhurst,” he said.

If the Lions win on Sunday, they will finish the season with a record of 10-7.