Music therapy can help students cope with anxiety and stress 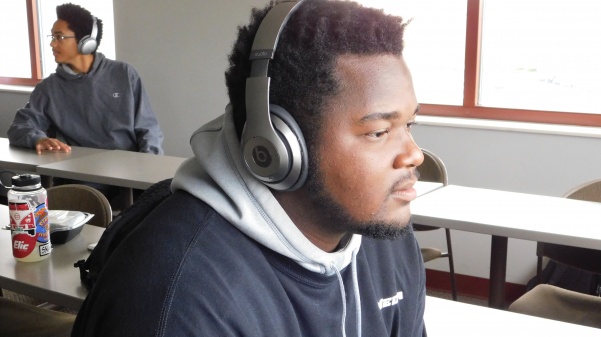 The surge of smartphones and headphones means people today can use music anytime to cope with everyday stresses.

Music can be an effective tool for a person’s therapeutic needs, said Cynthia Briggs, director of the music therapy program at Maryville University.

After World War I and II, musicians visited veterans in hospitals all over the country to play for them while they were recovering both physically and emotionally, according to the American Music Therapy Association.

Briggs said people are “hard-wired” for elements of music because our brains are naturally in sync with rhythm.

According to the AMTA, music therapy is similar to physical therapy, but uses music to “address physical, psychological, cognitive and/or social functioning for patients of all ages.”

Findings by the AMTA indicate that music is a form of “sensory stimulation” that encourages different reactions based on types of music.

Briggs said that using the preferred music of the patient becomes a stimulant to get the person to talk and personally open up. The music therapist uses the lyrics to prompt a dialogue about difficult topics.

Marilyn Patterson, a Lindenwood psychology professor, said that music can be used to help reach people who can’t express themselves verbally.

For Abbey Havens, an interactive media and web design major, music does just that.

Havens said that she was coping with depression when she discovered alternative rock band Pierce The Veil.

“Their lyrics spoke the words that I could never speak out loud,” she said.

It was very hard for Havens to show her emotions in high school. She said that she was in a very “suppressed environment,” so her emotions were numbed. Music helped her feel and process those emotions.

“Music helped me rediscover the emotions that I had lost,” Havens said. “All the pent-up pain came in the form of tears. I cried many times, but it was in a way that actually healed me. This was crying that I needed to do in order to move on and start getting better.”

Havens said that music has made it easier for her to let go of “all the stress of life” and enjoy herself.

A study by the Stanford University School of Medicine found that music can “engage the areas of the brain involved with paying attention, making predictions and updating the event in memory.”

Briggs said music is very valuable in terms of learning because the brain organizes, stores and easily retrieves songs, lyrics and tunes.

“Music is received and processed across all lobes of the brain,” she said.

The study also found that brain performance was at its highest when there was a silence period between musical numbers.

She said attention is a skill that has to be cultivated. For example, for children who are on the autism spectrum or have an attention deficit disorder, music is a way to increase attention.

Briggs said that music can be viewed as a “masking device” when it’s used to study because it can block out what is going on around students.

Havens said it’s easier for her to focus on homework when music she enjoys is playing in the background.

“If I need a quiet break, I focus on a couple lines of music before jumping back into my work.” Havens said.

Bringing headphones to campus is another way that music helps students like social work major Samantha Pearlman stay on track.

“Music allows me to focus and enjoy my day and calms me down before taking an exam,” Pearlman said.

Listening to music with a fast tempo before an exam can help boost alertness and concentration, according to research from Stanford University. Upbeat tempos can make a person feel “optimistic,” and a slower tempo can help someone relax and let go of stress.

A study conducted by the University of Utah Pain Research Center found that pain decreased when the subjects were listening to music, following melodies and identifying tones.

Music can also help reduce pain by “activating sensory pathways that compete with pain pathways,” which can cause an emotional response and shift focus away from pain.

Another study by the University of Missouri found that listening to music when you are angry or sad can boost your mood.

Therefore, as research shows, music is a powerful tool helping people mentally as well as connecting them with their inner self and the world.

“Physiologically, we can’t resist [music],” Briggs said. “We are such rhythmic beings.”