From streets to scrums 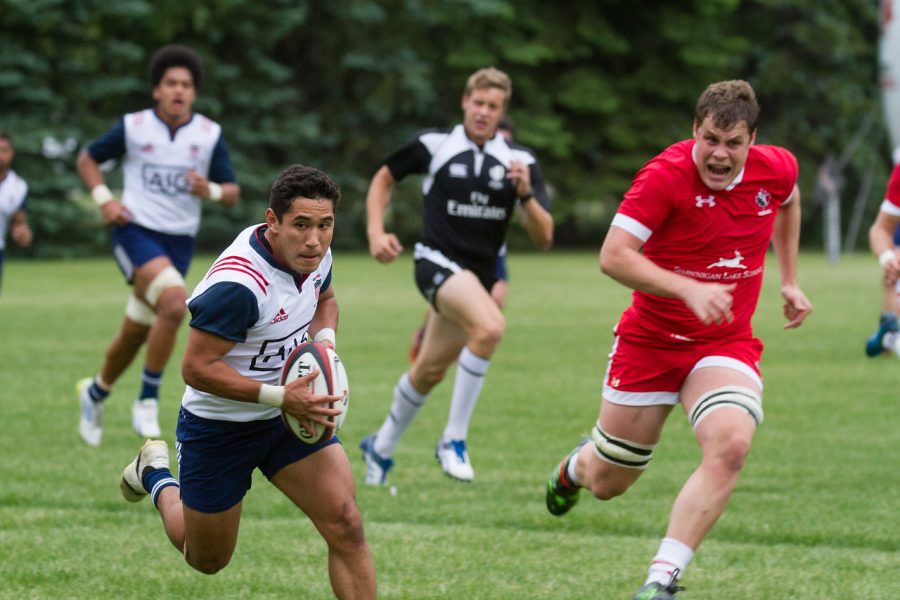 Cristian Rodriguez charges down the field, avoiding defenders, to score a try during the All-American Rugby match against Oxford University on Sept. 16 in Philadelphia, Pennsylvania.
Photo from Cristian Rodriguez

While Rodriguez worked this past year to make the All-American collegiate 7s and 15s teams and the U20 American team, four of his high school classmates died as a result of his hometown’s gang and drug culture.

“That’s how it goes if you get caught up not doing anything, you join the gang,” he said.

Rodriguez was able to choose a different path when neighborhood counselor Ernie Vargas introduced Rodriguez to rugby in seventh grade.

Rodriguez, who has tan skin from his Hispanic descent and towers over none of his teammates, was a natural athlete growing up.

“I don’t want it to seem like I stood out, but I enjoyed it more, so I stood out,” Rodriguez said.

Vargas said it was more than athleticism that motivated Rodriguez; his mom was always there for him.

Rodriguez’s rugby career took its first positive turn his sophomore year of high school when he made it onto a regional team, the SoCal Griffins.
“It was just based off of athleticism because I wasn’t very good at rugby,” he said.

His senior year he planned to go to community college, but that changed when his Griffins coach was short on players for a tournament and asked Rodriguez to play.

At the tournament, Rodriguez met a Lindenwood coach, who offered him a scholarship after recognizing his potential. Lindenwood was his only scholarship offer.

Vargas said Lindenwood’s atmosphere made Rodriguez blossom as an athlete.

“He is among the most outstanding players, and so that makes you step up,” he said. “And he always steps up to the challenge.”

Vargas recognized that sports could be an outlet for the energy the kids in the neighborhood usually reserved for street fighting.

“I thought, well, if you take the energy that the kids have … and just reverse it to the athletic field … [and] get them to buy into the concept that you can do it as a team rather than a gang,” Vargas said. “Join a team, not a gang; it’s better.”

In 1986, Vargas started the Alternatives to Gang Membership Program with the aim of providing sports and academic programs.

Rodriguez embraced the concept, and after traveling 26 hours to St. Charles, he’s found success as part of a rugby team.

In his freshman year of college, Rodriguez was invited to the Under 20 USA Rugby Camp. He was not selected for the team, but his sophomore year, he was invited again and made the team.

Only 35 players were chosen out of all collegiate teams in the U.S., and Rodriguez was the starting fullback for both All-American teams. Rodriguez played against top rugby players from Oxford University and Olympic gold medalists from Fiji.

Through rugby, Rodriguez has been able to travel to more than 25 states and England.

“If it weren’t for rugby, I would never have been to the places I’ve been to today,” he said.

After traveling to the Olympic Training Center three times, Rodriguez has set his goals on representing the United States in a rugby match.

He said the route he is on now, making the Collegiate All-Americans his sophomore year, is the same one as the current captain of the men’s USA 7s team.

Rodriguez, known as “Roddy” to teammates, is a crucial part of the team, according to team captain Jack Huckstepp.

“Roddy can match anyone we play against for physicality, and other teams underestimate him at their own risk,” he said.

But even with all the success, Rodriguez said he still wants to remain the same player he was as a fresh-faced, eager high schooler.

“I’ve seen people get these accomplishments that I’ve had, and their head will get really big about it,” he said. “They’ll end up turning into the guys that go to practice and not practice and just stand on the sidelines and watch.”

Rodriguez said he is successful today because of the chances and help he got growing up. Now he dreams of helping another athlete the same way Vargas did for him on the streets of Hawaiian Gardens.

“I want somebody else to feel what I’m feeling,” he said. “I feel selfish because I’m having all this fun. … I feel like there’s a lot of people who are doing as much, or if not more than what I’ve ever done, and they don’t get anything for it. If I’m not helping them, I’ll help their kids one day.”

Rodriguez said he realized he wanted to take over the hometown program after an internship with Vargas in 2016. Immediately after he got back to school, he changed his major to recreation administration from athletic training and has been interning every summer since.

Vargas sees Rodriguez as the man to replace him because he sees compassion, boldness and inner strength within him.

“When he’s worked with the kids with me, they believe in him — what he says, how he coaches,” Vargas said.

Rodriguez said he has dreams to expand the program to a team of neighborhood counselors and wants to make the ATGM its own department within the city.

He has found his calling in life, not only as an All-American athlete, but also as a coach and mentor to kids in need.