Breaking the silence about mental health issues in college 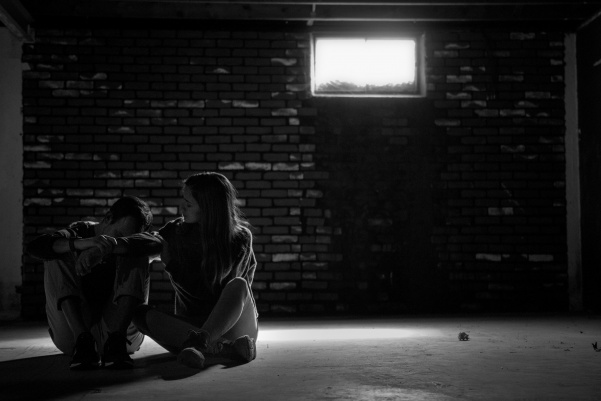 More than 75 percent of all mental health conditions begin before the age of 24, according to the National Alliance on Mental Illness, which makes college a critical time.
Photo illustration by Julius Damenz

For theater student Megan Wiegert, one day in September 2016 was when everything broke down and everything could have ended.

“It was so exhausting. I didn’t want to die…” – Megan Wiegert

She texted her friend in Los Angeles hoping she would talk her out of it. That friend in turn called Wiegert’s roommate on campus who came to help her.

Without those two friends, she might not be here today.

“I’m terrified knowing that there are people out there, there are people around me every day who might be feeling the same way I felt,” Wiegert said. “I don’t want anyone to feel that way.”

More than half of college students have had thoughts about suicide, and one in 10 students seriously considers attempting it, according to activeminds.org, a nonprofit organization dedicated to raising mental health awareness among college students.

“This is very common,” said Linda Fehrmann, president of the eastern Missouri chapter of the American Foundation for Suicide Prevention. “There’s many, many students experiencing the same thing. You’re not alone. And you can reach out, and you can get help.”

More than 75 percent of all mental health conditions begin before the age of 24, according to the National Alliance on Mental Illness, which makes college a critical time.

Lindenwood’s Dean of Students Shane Williamson is in charge of the campus Wellness Center. She said depression, anxiety and eating disorders are the three most common reasons students seek counseling services on campus.

[perfectpullquote align=”right” cite=”Megan Wiegert” link=”” color=”” class=”” size=””]“I had a very normal, happy childhood. And I think that’s one of the things that gets most frustrating for me because I shouldn’t be someone who is depressed.” [/perfectpullquote]

Wiegert said she has struggled with anxiety and depression pretty much her whole life. She said that anyone can be susceptible to mental struggles, sometimes because of genetics.

“I had a very normal, happy childhood,” she said. “And I think that’s one of the things that gets most frustrating for me because I shouldn’t be someone who is depressed.”

As the statistics about the issues skyrocket, so does the weight of stigma surrounding the lack of conversation and negative preconceptions of mental health issues.

Wiegert said people are facilitating the mental illness epidemic in this country by creating an atmosphere in which it is easier to fall victim to it by allowing the stigma around it to go on.
THE PRESSURE IN COLLEGE
More than 80 percent of college students felt overwhelmed by all they had to do in the past year, and 45 percent have felt things were hopeless, according to activeminds.org.

Lindenwood clinical psychology professor Christopher Scribner said the process of going to college is stressful because students leave their support systems behind often for the first time. Additionally, the pressure of academic success, finances as well as social pressure weighs into it.

“You are faced with ‘How can I make new friends? Are people going to like me? Who am I going to fit in with?’” he said. “And that can be challenging to a lot of people.”

Both Williamson and Scribner said three simple things can help with the pressure: exercise, diet and sleep.

Research on exercise shows that it can help improve mood, boost self-esteem, improve sleep and reduce anxiety and depression.

When exercising, natural brain chemicals called endorphins are released, which bring up a sense of well-being.
Scribner said falling into a pattern of not eating healthy in college can happen quite easily, which can have a negative impact similar to lack of sleep.

“Unfortunately, a lot of college students don’t get enough sleep, and that can take a toll on the person in a number of ways; it can obviously have physical effects,” he said. “If you’re sleep-deprived, you become more vulnerable to getting sick.”

The consequences of this include increased risk of academic failure and impaired mood.
THE EFFECTS OF SOCIAL MEDIA
Scribner said social media is “a mixed blessing.”

“It can have a way of intruding [on] things like doing schoolwork,” he said. “Occasionally, it can become a distraction for people. And if your social ties to other people occur mainly on social media or even exclusively through social media, that is usually seen as a not good thing.”

According to an article from The Atlantic, “Have Smartphones Destroyed a Generation?” the invention of smartphones has led to a massive change in teenagers’ lives, including social interactions and mental health. And it is not seen positively.

Jean Twenge wrote in the article, “Teens spend more time on smartphones and less time on in-person social interactions, loneliness is more common. So is depression. Once again, the effect of screen activities is unmistakable: The more time teens spend looking at screens, the more likely they are to report symptoms of depression.”


“SHE’S JUST SEEKING ATTENTION”
It has been over a year since Wiegert’s darkest moment in her life, and it still makes her emotional thinking of how she felt at the time.

“I was feeling scared,” she said. “I was feeling like no one’s ever going to pay attention to how much I’m hurting to take me seriously. That everyone thinks that I’m just being dramatic.”
Wiegert said a big part of the stigma surrounding expression of negative feelings and troubled mental state is the perception that the person is simply seeking attention.

“Never ever ever ever make the assumption that somebody who says they’re depressed is faking it,” she said. “Because why on earth would you want to run that risk?”

Scribner said this “seeking attention” stigma has always troubled him.

“If someone is struggling with depression, and if that person is in some need of more social support, then yes, they do want attention,” he said. “They need attention. I wish that didn’t have to be seen as a source of shame for the person.”

“We judge others or we push them away or we make up stories about them, what they’re going through because something in their discomfort triggers ours,” she said. “So it’s never someone else’s fault; it’s not even our fault. It’s just how we work. It’s just how we are. It’s human nature.”
“We’ve got a lot to learn, especially when it comes to this topic…” – Megan Wiegert


OPENING THE DIALOGUE
Fehrmann, from the American Foundation for Suicide Prevention, said having an honest, direct conversation is the key to reducing stigma surrounding the conversation about mental health issues. This also applies to suicide. She said there is a myth that one should not ask people directly whether they have suicidal thoughts.

Scribner said opening conversation like that gives a platform to talk about those thoughts and come up with a different resolution.

“One of the best things you can do is to listen to a person,” he said. “To be open and willing to hear what they have to say, what their concerns are without judging them.”

Wiegert is a clinical psychology minor alongside her acting major and said she has faced a lot of people saying “I don’t know what to say” when she’s having a hard time. She pointed out that even saying that is better than saying nothing. It can be saying something as simple as “Can I do anything to help?”

“Sometimes they say no, but that doesn’t mean that it doesn’t help to ask,” Wiegert said.

And sometimes just being present is enough, Scribner said.

Wiegert said the good thing to understand is that mental health issues cannot just be magically fixed, but are something that people will have to learn to cope with, but they can still live happy lives. She is still in therapy and on medication for her anxiety and depression, but even that does not take away her darker moments.

“I still struggle a lot, but now, because of the help that I’ve had, I can usually see it coming,” she said. “And if I can’t, I can at least handle it when it’s here. And I don’t panic as much when I do start to experience a depressive episode because I know that it’s going to pass.”

Williamson said another important form of dialogue is counseling. She said counseling is a key to find mechanisms to take control of the mental health issues one is having.

“That’s the benefits and the power of therapy,” she said.

Lindenwood’s Student Counseling & Health Center offers free counseling to students with an unlimited number of sessions, which is something many schools can’t offer.

Williamson said people need to see that it is OK to get help and support from the center.

Wiegert said mechanisms she uses when a wave of depression hits her are meditation, coloring books, music and reading.

Wiegert said it is not a single thing but the cohesive combination of therapy, medication and individual coping mechanisms that will help the most.

“Not one thing is going to fix all of your problems,” she said. “It’s about what you need in the moment.”

Turner-Jones said creating an inner dialogue between one’s body and mind is essential besides medication and therapy, especially in moments when there is nobody around to talk to.

Scribner said once a person has gone through psychological struggles, their understanding and “sensitivity to suffering” will be enhanced if someone approaches them.

“They’re kind of uniquely positioned to be able to really get what’s happening with this person and to be empathetic toward them and to be sensitive to what’s going on,” he said. “So that’s like the little silver lining that can come out of misery and suffering sometimes.”
NEED TO TALK TO SOMEONE PROFESSIONAL?

• Call Lindenwood Counseling Center at 636-949-4525.
• The counseling is completely confidential and free for students, offering unlimited counseling sessions depending on students’ needs.
• Once you call, they will ask a few questions to determine the level of urgency for counseling. Based on the level of need, you will go in and fill out an intake form at the center on the third floor of Evans Commons, which helps them to find the right staff member for you to talk to.
• Besides the counseling professionals and interns, athletes can seek the assistance of the director of student athlete mental health, and a chaplain is also available for students who are in need of more spiritual support.
• Support groups are also offered to people with certain struggles, such as drug and alcohol and academic achievement groups.