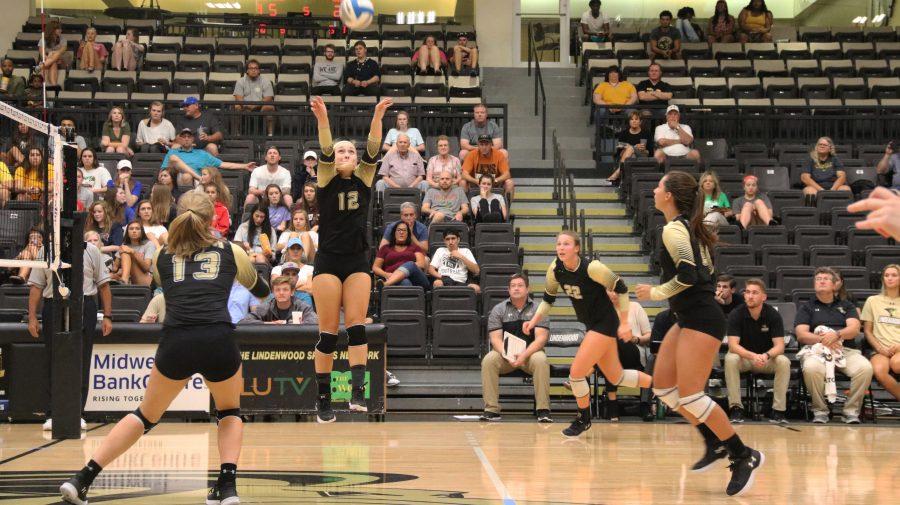 In a file photo from 2017, Ally Clancy (No.12) sets the ball during a game against Missouri Western in Hyland Arena.
Photo by Maria Escalona.

Here are the Lindenwood sporting events on campus Nov. 7 – Nov. 13. Students can earn points by checking into events on the Lindenwood Lion Pride app. Points can then be redeemed for prizes, including free Under Armour shoes and Papa John’s pizza. The app is available for free download on Apple’s App Store and the  Google Play store.

The men’s Division II ice hockey team (5-6-1) will look to bounce back from a 5-2 loss to McKendree University last Wednesday when it takes on rival Lindenwood-Belleville (4-3) on Wednesday. The last time the Lions played the Lynx was Oct. 11, and the Lions lost 4-2. In addition to the Belleville game, the Lions will face Davenport (2-8) in a Saturday-Sunday doubleheader.

The women’s volleyball team (18-12, 9-7 MIAA) is fresh off a successful weekend in which they qualified for their first ever MIAA tournament. The Lions will be looking to add to their three-game winning streak when they take on conference cellar-dwellers Southwest Baptist (2-28, 1-15 MIAA).

WOMEN’S BASKETBALL VS UNIVERSITY OF ARKANSAS AT MONTICELLO

The women’s basketball team will host the MIAA/GAC challenge this weekend. The Lions are coming off two big exhibition losses against Division I opponents St. Louis University and Missouri State. The Lions will be hoping to start their season on the right foot when they take on Southern Arkansas on Friday and Arkansas-Monticello on Saturday. It will be Southern Arkansas’ first game of the season. Arkansas-Monticello’s only game thus far has been a loss at the hands of Division I Arkansas State.

The men’s Division I ice hockey team (11-1-3) will return to the rink after splitting last weekend’s series with Robert Morris. The Lions face Missouri State (13-10) on Friday and Saturday. The last time these two teams met, the Lions won a tight contest 3-2.

MEN’S RUGBY VS UNIVERSITY OF MISSOURI

MEN’S RUGBY VS UNIVERSITY OF DELAWARE

The men’s rugby team (6-0) will take on Missouri and Delaware this weekend. The Lions are coming off the back off a big victory over Lindenwood-Belleville and will be looking to close out their preseason undefeated.

The football team (4-6) has achieved their most successful season since 2012 and will be looking to add more victories to their tally when they face Central Missouri (7-3) on Saturday afternoon. Lindenwood defeated Missouri Southern State 37-17 last weekend. Central Missouri is coming in to the contest after winning four of their last five games. The Lions will lean heavily on running backs Calen Campbell and Shakeem Warton. The duo have scored 14 touchdowns between them this year. Campbell’s eight rushing touchdowns is good enough for fourth in the