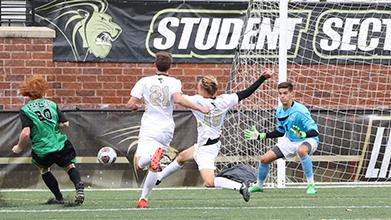 Goalie Tim Licht saves a shot from Peyton Marter, No. 20 of Delta State in the Lions' 2-0 win on Oct. 11. This was Licht's second shutout on the season.
Photo by Kyle Rhine

Sophomore goalie Tim Licht, who led the MIAA conference in save percentage and goals against average this season, got an unusual start in net.

After playing forward for six years with his youth team, a new coach asked him to play in goal for their first team practice.

“I thought it would just be for one practice,” he said. “But then I started liking it, and I stayed in goal.”

Licht also played tennis for seven years in his youth, and he credits that game with helping him to improve his quickness and hand-eye coordination, two things that are important for keepers.

Licht grew up in Munster, Germany, and has a 23-year-old brother Mats, who is currently studying European Studies in Amsterdam, Netherlands. His brother never really was interested in playing sports, but he found his love for soccer watching Tim play, he said.

“He was always the loudest fan on the sideline,” Licht said.

Before every game, Licht has a go-to music playlist that he has been adding songs to for the past three years. But one song,   “Eye of the Tiger,” by Survivor, is always the last one he listens to before the coach comes into the locker room, he said.

During a game, Licht talks about the focus he needs to have from the beginning to end.

“You need to be strong mentally and stay focused every single second because anything can happen,” Licht said. “You don’t get a shot for 89 minutes, and have to make a big save in the very last minute.”

Licht made some big saves for the Lions this season as he recorded five shutouts, with four coming in Lindenwood’s last five games.

Lindenwood had a record of 9-3 when Licht was in goal, along with him allowing less than a goal per game with an average of 0.73 goals allowed, according to Lindenwood Athletics.

Coach Carl Hutter said Licht had a very good year, but he needs to keep working on his communication skills.

Hutter said Licht has earned the starting goalie position going into next season.