Women’s volleyball cruises to 19th victory of the season 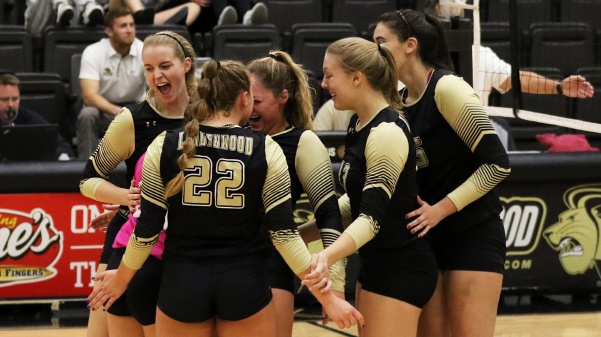 Teammates Ivy Reynolds (22), Kat Finnerty (13). and others celebrate after scoring in their last home game of the season. The Lions defeated Southwest Baptist on Thursday.
Photo by Joseph Mesenbrink

The Lindenwood women’s volleyball team (19-12, 10-7 MIAA) defeated Southwest Baptist (2-29, 1-16 MIAA) 25-10, 25-14, 25-17 on Thursday night in Hyland Arena. This year is one for the record books as the Lions recorded their most successful season in the NCAA era and also qualified for the MIAA conference tournament for the first time.

The Lions shared the spoils on attack. Emily Wylie had the most kills for the Lions, as she has done all season, with nine. Alex Dahlstrom was next with seven. Haley Sigel and Alex Bogusz both recorded five.

Defense was what won the Lions the game, though. The Lions recorded 14 blocks and managed to hold Southwest Baptist to a -.034 hitting percentage.

The win means the Lions consolidated the sixth position in the MIAA conference and will travel to play Central Oklahoma (27-4, 14-3 MIAA) on Tuesday Nov. 14.

“We wanted to go into this match and play sharp,” senior Megan Hellwege said. “We want this weekend to prepare us for the tournament. So each point we really focused on winning and doing the things that would set us up for success. Coach Condon kept pushing us to serve more aggressively, and I think that got stronger as the game went on.”

Another bright point on the season has been the play of Hellwege as she currently leads the MIAA in digs with 674.

“It was a goal of mine at the beginning of the season,” Hellwege said. “So it’s awesome to see all the hard work paying off. But at the end of the day, stats don’t really matter. Team success is above all, and I’m happy to help in any way I can.”

The Lions’ next contest will be their last of the regular season and they will be searching for their 20th win of the season. The Lions will take on Missouri Southern State (11-18, 4-12 MIAA) at 6 p.m. on Nov. 10 in Joplin, Missouri.