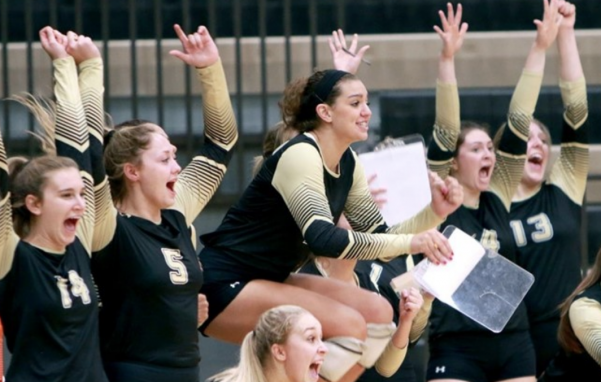 Lindenwood volleyball players celebrate at Hyland Arena. The Lions won their 20th game of the season on Friday. Lindenwood will play in their first ever MIAA conference tournament game on Tuesday.
Photo by Don Adams Jr

The Lions have hit form at the right part of the season. Friday’s win was their fifth in a row as they head into postseason play on Tuesday.

“We served aggressively and executed really well at the net,” Emily Wylie said. “Everyone worked well together even in the chaotic plays to stay aggressive and in control to get the point.”

The Lions’ blocking at the net was a strong point for them in the game. Junior Alex Bogusz led the team in that department with five blocks. The Lions had 14 blocks in total on the night.

Wylie broke Kayla Guyot’s Lindenwood NCAA record for most kills in a season during the game. Wylie recorded 19 kills on the night to bring her total for the season to 327. The senior transfer also had a hitting percentage of .395 on the night.

“I definitely couldn’t have done it without my teammates getting great passes, sets and the other hitter pulling the block,” Wylie said about her record.

Alex Dahlstrom and Haley Sigel also contributed efficiently on offense for the Lions. The duo got nine kills each.

The Lions will now face Central Oklahoma at 7 p.m. on Tuesday, Nov. 14, in Edmond, Oklahoma. The last time the teams played, the Lions lost in three sets.