Students open up at Lindenwood Monologues 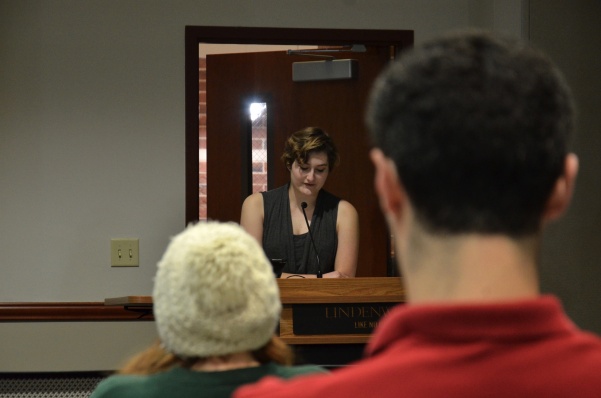 Freshman Caylin Choquette performs an original piece titled “The Comedian who Couldn’t Make me Laugh.” at the LU Monologues on Nov. 8 in the Spellmann AB Leadership room at 7 p.m.
Photo by Rolando Dupuy.

Lindenwood students talked about their past experiences with sexual assault and other difficult situations at the Lindenwood Monologues on Nov. 8.

Junior Hailey Holman, president of the Campus Organization Against Sexual Assault, started off the event with a monologue called “Mine.” Four other speakers followed her. Some students spoke original pieces while others did pieces written by different authors that they felt had connections to.

The event was hosted by the COASA and the Gender/Sexuality Alliance in the Spellmann AB Leadership room. Freshman Caylin Choquette was one of the students who did an original piece. Choquette’s monologue read a personal piece about her recent Tinder date titled “The Comedian Who Couldn’t Make Me Laugh.”

“When I talk about my sexual assault, I notice my listeners recoil…” – Caylin Choquette

The monologue first discussed how she was so nervous to meet this man and how great the date went until the two left the comedy club. The man began to get very aggressive with her, leading to her sexual assault.

“Just something told me that I needed to tell this story, and it just poured out on the paper,” Choquette said.

Choquette’s monologue originally started off as a class assignment, but after writing it, she posted it to social media. The piece received a large amount of feedback, and her mother reached out to console her. Choquette then realized that her mother and grandmother also were sexually assaulted.

“This was one of the most cathartic experiences,” Choquette said.

COASA and GSA also had a sign-up sheet for people who wanted to pursue membership. The event served snacks and refreshments, and about 20 students attended. Holman plans to have this event again the following school year.