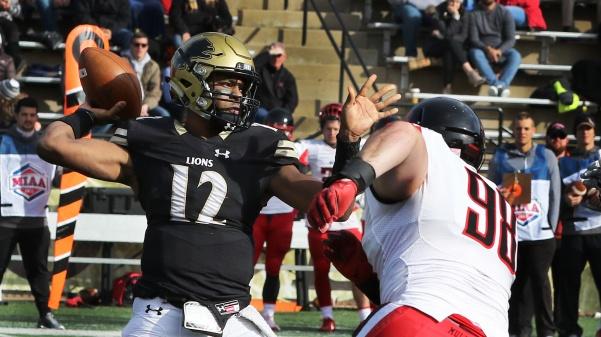 Lions quarterback Najee Jackson prepares to heave the ball while being rushed by the Mules' Wyatt Hendrix.
Photo by J.T. Buchheit

The Lions lost 31-24 at home after failing to overcome a late touchdown by the University of Central Missouri Mules on Saturday, Nov. 11. Lindenwood finished the season with a 4-7 record, while Central Missouri went to 8-3.

At the end of the first quarter, the Lions led 3-0 after a field goal by Travis Spraul. Lindenwood extended its lead to 10 with 8:36 left in the second quarter after Najee Jackson threw a 21-yard touchdown to Deantrell Prince.

At the start of the Lions’ drive with 5:42 remaining in the quarter, running back Shakeem Wharton fumbled, and the ball was recovered by the Mules at Lindenwood’s 31-yard line. Mules running back Devante Turner crossed the goal line later in the drive, and the score tightened to 10-7 in favor of the Lions.

The Lions opened the second half in good field position after a Mules onside kick was recovered by Lindenwood at Central Missouri’s 48-yard line. Lions running back Calen Campbell scored on a 12-yard rush to increase the lead to 17-7.

Jackson lost a fumble on a sack with 8:40 left in the third quarter, and the Mules started their drive at the Lions 48-yard line. Mules quarterback Brook Bolles threw a 5-yard touchdown to Kyrion Parker to cap off the drive and make the score 17-14 Lions.

Shortly after the start of the fourth quarter, a 15-yard pass interference penalty by Central Missouri’s Jackson Newman allowed the Lions to advance to the Mules 2-yard line, and Jackson extended the lead by throwing a touchdown to Kai Collier. The score was 24-14 Lions.

On the next drive, Central Missouri launched an aerial attack. Bolles threw four passes for 81 yards, including a 31-yard touchdown to Jaylen Zachery, making the score 24-21 Lions.

The Mules tied the game with 5:42 remaining in the fourth quarter on a 47-yard field goal by Alex Langer.

Central Missouri took its first lead of the game with 2:07 remaining. Lions defensive back Darrius Williams committed a personal foul after a tackle at Lindenwood’s 26-yard line that put the Mules in the red zone at the Lions 13-yard line. Turner later ran it in from 1 yard out to make the game 31-24 Mules.

After scrambling to convert a fourth-and-7, Jackson threw a deep pass that was intercepted by the Mules’ Monteze Latimore with 26 seconds remaining. With the Lions out of timeouts, Bolles took a knee, ending the game.

The end of the season also concluded head coach Jed Stugart’s first year at the helm after transferring from the University of Sioux Falls. He now holds a career coaching record of 95-31.