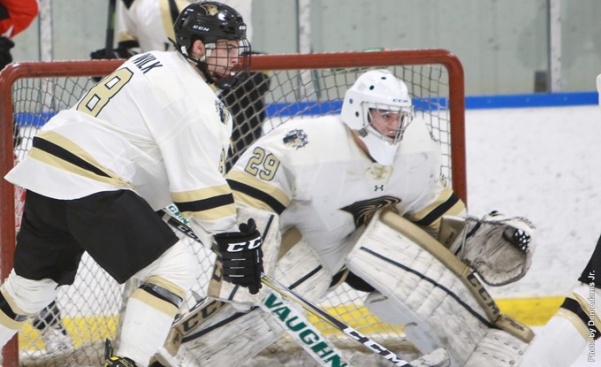 Lindenwood's second game against the Ice Bears on Saturday, Nov. 11 saw heavy scoring from the Lions. Austin Wilk (left) assisted two of the four goals of the game and Lindenwood senior goalie Michael Hails finished the game with a shutout.
Photo by Don Adams Jr.

After a 3-2 overtime win on Sept. 24 against the Missouri State Ice Bears in Springfield, the Lindenwood Lions men’s ice hockey team played Missouri State for the second and third time this weekend at the Wentzville Ice Arena. They swept the Ice Bears during Lindenwood’s final home game before they go on the road.

The Lions scored early at 1:11 in the first period with junior forward Hayden Dawes’ first of three goals during their Friday night game against the Ice Bears. The first goal was assisted by sophomore defensemen Aapo Nurminen and Nick Greene.

Freshman forward Dom Kolbeins continued the scoring and put the Lions up 2-0 in the first period with help from Zach Mitchell and Jake Townsend less than 2 minutes after Dawes’ initial goal.

Missouri State answered late in the first period with a goal, making the score 2-1 going into the second period.

Dawes scored the first goal of the second period as well at the 1:42 mark with assistance from Hunter Ruschmeyer. Lindenwood continued adding points to the board with the next goal coming from senior forward Alexander Carlsson.

Missouri State quickly put two goals on the board within seconds of each other, but the Lions still held onto the 4-3 lead going into the third.

At 1:11 in the third, Dawes scored his third goal of the game unassisted, putting the Lions up 5-3.

Lindenwood closed the game with a 6-3 lead after Nurminen scored the final goal on a play by Dawes and Townsend according to the ACHA official website.

[perfectpullquote align=”right” cite=”” link=”” color=”” class=”” size=””] “It was nice to be able to contribute and help the team get a win. Fortunately, my parents were able to be here to see it too, so it felt really good to perform for them!” said Hayden Dawes about his hat trick. [/perfectpullquote]

Lindenwood’s second game against the Ice Bears on Saturday, Nov. 11 saw heavy scoring from the Lions and a shutout for Lindenwood senior goalie Michael Hails.

Lindenwood had 47 shots on goal, and Missouri State had 22, all stopped by Hails. The final score was 8-0 in favor of the Lions.

This weekend’s games were Lindenwood’s 12th and 13th wins of the season.

They will travel to Athens, Ohio, next weekend to play Ohio University on Friday, Nov. 17 at 7 p.m. and Saturday, Nov. 18 at 7 p.m. Both games are available to be streamed on YouTube.